Jitendra Narayan Singh Tyagi alias Waseem Rizvi was arrested on Thursday for giving a hate speech in the Parliament of Religions held in Haridwar from December 17 to 19. During this a video has surfaced. In this, Uttarakhand Police is asking Narasimhanand Giri to get down from the car along with Wasim Rizvi. Narasimhanand Giri is seen saying to the police officers, ‘Dude, you all will die, you will get your children killed too’.

The arrest was made from the UP-Uttarakhand border.
This video is from Narsan border of UP-Uttarakhand, when Wasim Rizvi, Narsimhanand Giri and another Maharaj were sitting in the car. His car was stopped by the Jwalapur police station of Haridwar. Tried to get all three out of the car. During this, there was a scuffle between Narasimhanand Giri and the police officers. He asked the police – why are you arresting them.

The police said that as per the legal protocol, we have to make the arrest. He is an accused in 3 cases. On this Narasimhanand said that I am with all the three cases. In the 44-second video, in the last 6 seconds of the video, Narasimhanand Giri says – You all will die, you will also get your children killed. The officers of the CO level hold hands and say – you are right. Narasimhanand says- I am going CO sir. 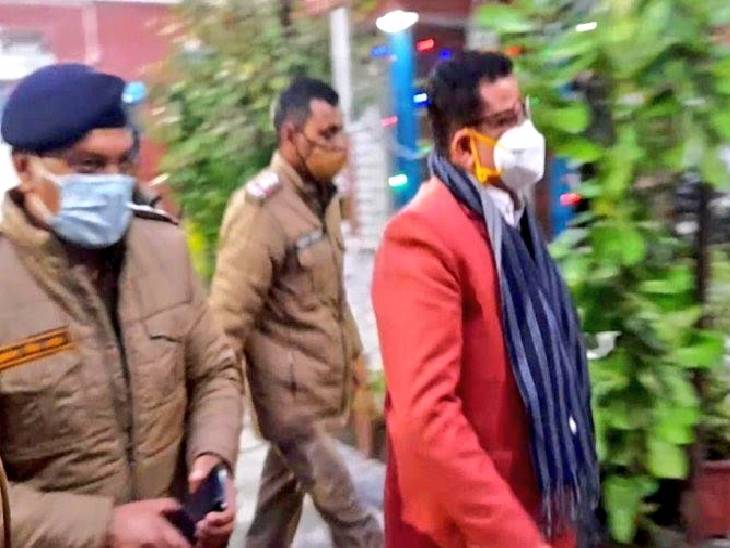 Wasim Rizvi was arrested by the Uttarakhand Police from the UP border.-File photo

Hearing on Rizvi’s bail application possible today
Haridwar court sent Jitendra Narayan Singh Tyagi alias Waseem Rizvi to jail on Thursday evening itself. In protest against this, Mahamandaleshwar Yati Narasimhanand Giri of Juna Akhara has sat on a waterless fast after giving up food and water at Sarvanand Ghat of Harki Paidi. They say that this satyagraha will continue till the release of Wasim Rizvi. Narasimhanand Giri said that we will sit till he is released from jail. Only after that we will take food and water.

A crime that many people have committed, arresting only one, leaving the rest behind. We have to bring 200 crore Muslims of the world to Sanatan. On the other hand, the bail application of Wasim Rizvi can be heard in the main court of Haridwar today.

Wasim Rizvi’s conversion took place in a temple in Ghaziabad
Narasimhanand Giri is the Peethadheeshwar of Dasna Devi Temple in Ghaziabad. In this temple, he got Wasim Rizvi converted on 6th December and gave him the new name Jitendra Narayan Singh Tyagi. Since the conversion, Wasim Rizvi has been continuously making controversial statements about Muslim religion. For this, three cases have been registered against him in Haridwar in the past.