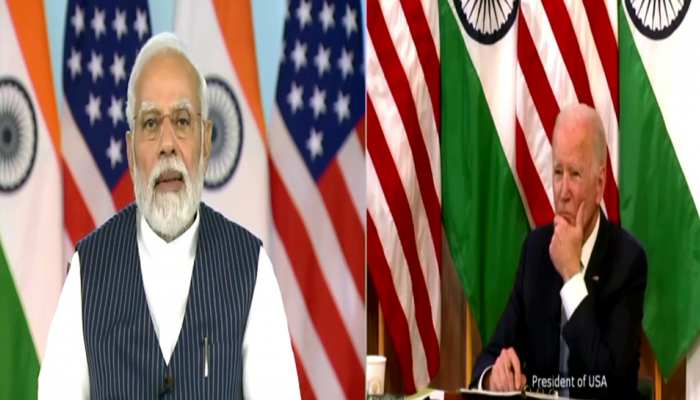 India-US 2+2 Dialogue: There was a virtual meeting between Prime Minister Narendra Modi and US President Joe Biden. Both the leaders welcomed each other warmly. During the meeting, PM Modi raised the issue of Ukraine crisis with President Biden.

New Delhi: The fourth round of 2+2 ministerial talks between India and the US is underway in Washington. India’s Defense Minister Rajnath Singh and External Affairs Minister S Jaishankar are currently in Washington, the capital of America. So far, three rounds of talks have been held between the two countries under the 2+2 dialogue format. India has developed such a mechanism with only four countries and those countries are America, Japan, Australia and Russia.

Significance and History of 2+2 Dialogue

Strategic, defense and security relations are given top priority in the 2+2 dialogue. Under this mechanism, there is a dialogue between the Defense and Foreign Ministers of the countries coming under this system. India started the 2+2 dialogue with America only. Foreign affairs experts say that India was hesitant to develop such a system, but the US insisted on starting it. In the year 2017, America persuaded India for 2+2 dialogue. Earlier, America used to negotiate this format only with Australia and Japan. From this it can be gauged that in recent years, how much importance of India has increased in the eyes of America.

The eyes of the whole world are on the Indo-US 2+2 Ministerial Dialogue as well as the talks between the Heads of State of both the countries. Before the ministerial talks on America’s initiative, President Joe Biden has spoken to Prime Minister Narendra Modi.

What happened between PM Modi and Biden?

There was a virtual meeting between Prime Minister Narendra Modi and US President Joe Biden. Both the leaders welcomed each other warmly. During the meeting, PM Modi raised the issue of Ukraine crisis with President Biden. PM Modi said that 2+2 talks of ministers will get a direction from this meeting. PM Modi said that as the world’s two largest and oldest democracies, we are natural partners. It was difficult to imagine such a relationship a decade ago, but today our relationship has grown tremendously.

What did PM Modi say on Russia-Ukraine war?

Raising the issue of Ukraine, PM Modi said that we are talking in such an environment when Ukraine remains a matter of concern for the whole world. A few weeks ago, 20,000 Indians were stranded there, mostly students. He said that India is ready to help Ukraine in any way. PM Modi said that the President of Russia and Ukraine should directly talk to each other and find a solution to this issue.