This person became famous due to strange ‘haircutting’, food items are seen on the head 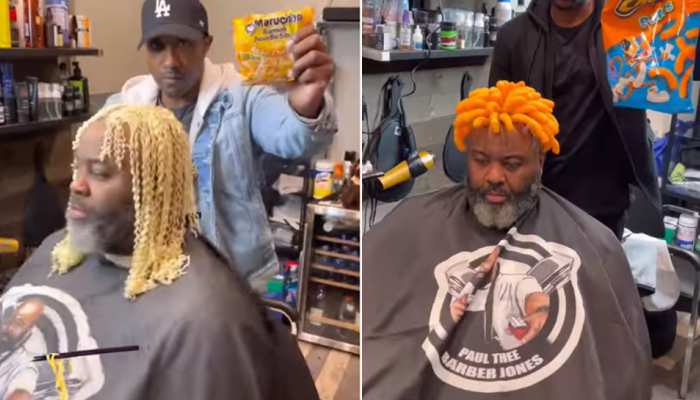 Weird Video: Thousands of videos are going viral on social media these days, one of them is going viral which you will be surprised after watching.

Viral Video: Can someone’s hairstyle make their mouth water? Probably not, but seeing the video you are about to watch, you will be blown away. An Instagram account named BMR Twins is going viral for showing ‘food hairstyles’ done on different people. The viral video primarily features a man named Paul Jones, who is himself a barber. Noodles were seen hanging on the man’s head and then the girls present there started eating him. After this, a puff-corn was seen on the person’s head.

It can be seen in the video that noodles are placed on Paul Jones’s head and two girls are present to eat him. Both start eating the noodles placed on his head. However, the good thing is that Paul has no hair on his head. After this, in the next video, there are puff-corns on the person’s head. Many such videos are becoming viral on the internet, in which some food item is kept on his head.

People are liking this video very much on social media. As soon as this video was uploaded on Instagram (Instagram Reels) by an account named bmrtwins1, people liked it a lot. Sharing this video, he wrote in the caption, ‘Hot Cheetos or Regular.’ The caption of another such video read, ‘What could be the flavor of the best Ramen noodles.’ Many other users also gave their feedback on this video (Instagram Reels Video).