Joe Biden: After the speech, Biden was seen doing handshake in the air, see viral video 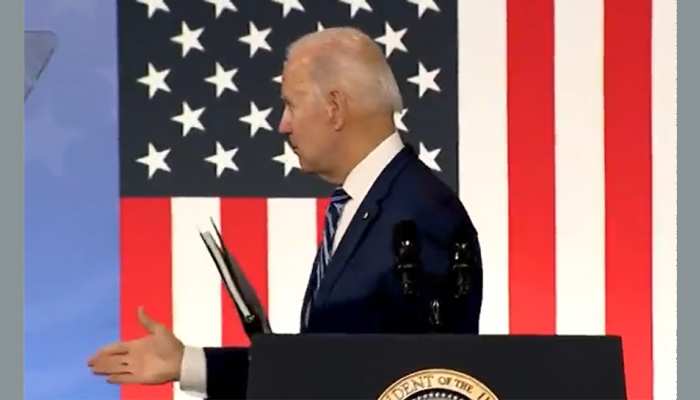 Viral Video: A video of US President Joe Biden is going viral, in which he is seen shaking hands in the air. While the opposition is targeting Biden regarding this video, the question is also being asked whether the US President…

Joe Biden News: US President Joe Biden is once again in discussion. He is making fun of a video on social media. At the same time, this video has given Biden opponents another opportunity to target him. In fact, Biden was giving a speech at the University of Pennsylvania in North Carolina on Thursday and after the speech was over, he was seen shaking hands in the air alone. This entire incident was captured in the video, which is now going viral.

no one else was on stage

After completing his speech, US President Joe Biden turned and started handshaking, while no one was there. Biden did not even realize that he was alone on the stage. It can be seen in the video that Biden turned to the right and extended his hand to handshake to someone while saying God bless you all, while no one was there. After this mistake, Biden suddenly turned to the other side.

After Biden finished his speech, he turned around and tried to shake hands with thin air and then wandered around looking confused pic.twitter.com/ZN00TLdUUo

Are you suffering from dementia?

After the video went viral, the US President is being mocked on social media. Some people even say that Biden is battling a disease called dementia. On the other hand, the opposition is also targeting his age. He says that Biden’s growing age is leaving him, so now he should also think about retiring from politics.

The US President has made such a ‘mistake’ in the past as well. Some time ago a video of him went viral, in which he left the straight path and entered his house. Then it was being said that maybe Biden suddenly forgot the way while walking. Let us tell you that Biden is looking quite silent these days. He also appeared quite distracted during an event last week.