Rahul Tripathi dived in the air and caught a surprising catch with one hand, see VIDEO 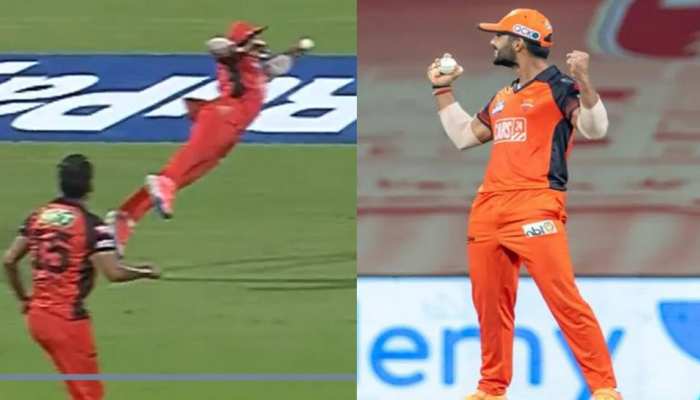 Sunrisers Hyderabad and Gujarat Titans are currently facing each other in the 21st match of IPL 2022. In this match, Rahul Tripathi has caught a great catch, which everyone was surprised to see.

New Delhi: Sunrisers Hyderabad and Gujarat Titans are face to face in the 21st match of IPL 2022. In this match, Hyderabad captain Kane Williamson won the toss and decided to bowl first. Rahul Tripathi caught a surprising catch for Hyderabad in the match.

Rahul Tripathi took a brilliant catch off Bhuvneshwar Kumar’s ball. Rahul took the catch of Shubman Gill while diving in the air. Shubman Gill made 7 in 9 balls, which included a four. Gill is running in excellent form. He scored 96 runs in the last match. It is a good thing for Hyderabad that the in-form batsman is dismissed so early. Shubman Gill was also surprised to see Rahul’s catch. Bowler Bhuvneshwar was also surprised to see Rahul’s catch.

Gujarat Titans, captained by Hardik Pandya, have so far won three matches in IPL 2022. Hardik is showing a wonderful game with ball and bat. Hardik Pandya can tear down any bowling attack when he is in his rhythm. On the other hand, Kane Williamson-led Sunrisers Hyderabad have won two matches in three matches. Hyderabad was defeated by Lucknow Super Giants and Rajasthan Royals in the first two matches, but the team made a comeback in the season after defeating Chennai in the last match.

Gujarat Titans have strong batsmen. They have strong openers like Shubman Gill and Matthew Wade. At the same time, Hardik Pandya, David Miller and Rahul Teotia are present in the middle order. Against Punjab Kings, Rahul had given the team victory by hitting two sixes in consecutive balls.