son, father, grandfather, great-grandfather and their father as well; Five generations seen together 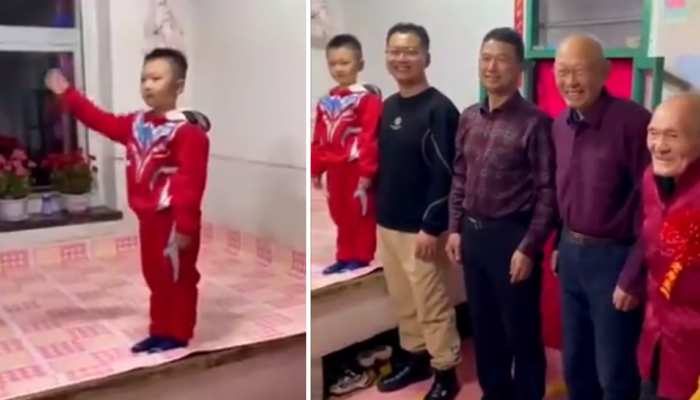 Anand Mahindra Tweet: Industrialist Anand Mahindra keeps sharing some video or post on his Twitter account every day. He is either inspirational or funny. He also does not forget to share the videos of his followers on his page. Anand Mahindra, who is known to always entertain his fans, has shared another post, in which five generations are seen together. He has shared this video on his official account.

Five generations seen together in the video

As we can see in the video a small child is standing on the bed, and he calls his father. His father comes to his son and stands up and then he calls his father i.e. the grandfather of the younger child. In the video, one by one, five generations are seen standing together. Son, father, grandfather, great-grandfather and also their father appeared together in one frame. This 20-second video is becoming fiercely viral on social media.

What a blessing. 5 generations together. I wonder how many families around the world have this rare privilege of 5 generations—mothers or fathers—together. Would be great to see a similar video from India… pic.twitter.com/JZhdMQ7HVP

Sharing the video, Anand Mahindra wrote in the caption, ‘What a good thing. 5 generations together. I wonder how many families around the world have this rare privilege of 5 generations – mother or father, or together. Would love to see similar video from India. After this tweet, families of five generations in India posted their pictures in the comment box. Not one or two but half a dozen people have posted pictures of their families.

Sir, this is my family, we completed 5 generations. Some local newspapers carried this news back then. The small baby in there is my nice. pic.twitter.com/5eVh906Kt6

My family had the blessings. Youngest is my daughter. Few years back. Unfortunately the great great grand mother is no more. pic.twitter.com/aH3MRxcTHr

A blast from the past..my zoo
This 5G also rocked cos it was an all women tribe

We have 5 generations in our family but not staying together as we all meet whenever there’s any function or something like that Blessed @anandmahindra Sir. pic.twitter.com/kRC7y5yhv9