Ruckus again in JNU, Left and ABVP face to face on the issue of non-veg on Ram Navami 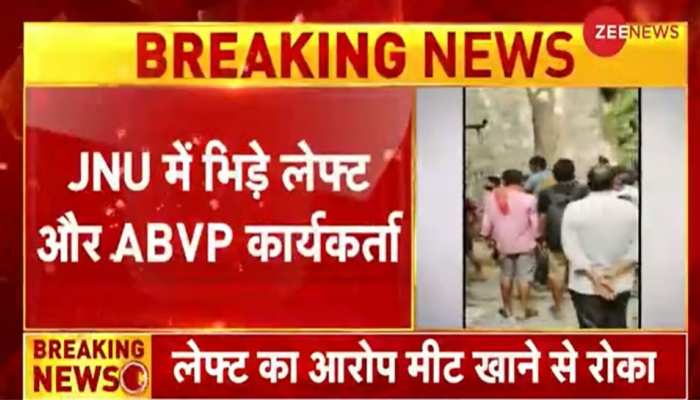 On Sunday, news of a clash between students of Left wing students and Akhil Bharatiya Vidyarthi Parishad (ABVP) has come to light in JNU over meat.

New Delhi: JNU, ​​which is often in controversy, is now in discussion once again. On Sunday, news of a clash between the students of the Left Wing Students’ Union and the students of Akhil Bharatiya Vidyarthi Parishad (ABVP) has come to the fore over meat in the university. Left wing students alleged that ABVP students assaulted the mess secretary of Kaveri Hostel over non-veg food.

At the same time, ABVP students allege that left wing students were stopping people from worshiping Ram Navami in Kaveri Hostel. Let us tell you that there seems to be a ruckus in the JNU campus regarding the matter.

Left made this allegation

Jawaharlal Nehru University Student Union has said that ABVP goons have created a violent atmosphere in Kaveri Hostel due to their hate politics and divisive agenda. They are forcing the mess committee to change the dinner menu and attacking the left wing students along with those associated with the mess. The menu has both vegetarian and non-vegetarian food. Students can take any food of their choice. But the ABVP workers created a ruckus by committing hooliganism. Along with this, the employees of the mess were also beaten up. ABVP workers pressurized the mess employees not to make non-veg food.

ABVP students say that students residing in Kaveri Hostel in JNU organized a havan-poojan on the campus on the day of Ram Navami. In such a situation, the people of the left wing did the work of disturbing the worship. Now Left Wing and ABVP are face to face. Left wing students on campus say they are being stopped from eating meat. Let us tell you that some videos of clashes between the two groups are going viral on social media.