Jahangirpuri Violence in Delhi: Delhi There was a lot of ruckus during the procession on the occasion of Hanuman birth anniversary in Jahangirpuri. According to Delhi Police, people were told about stone pelting, arson and firing during the procession. Top officials are on the spot and the situation is under control. In the midst of all this, the SIA of Delhi Police, who was injured in the violence, said what had happened at that time. BJP’s Delhi unit leaders, on the other hand, termed the clashes during the procession as a conspiracy and demanded a probe into the role of illegal tourists, Rohingyas and Bangladeshis in the incident.

BJP’s serious allegations
BJP Delhi State President Adesh Gupta and party MP Manoj Tiwari said that the attack on the procession was not a sudden but a conspiracy. BJP leader Kapil Sharma also alleged that pelting stones at the procession was a terrorist attack. He demanded immediate expulsion of illegal tourists from the country. Adesh Gupta said that he would meet the Union Home Minister and ask him to order a probe into the violence. He also questioned how water and electricity connections were provided to the Rohingya and Bangladeshi population living illegally in Delhi. “I want to ask Chief Minister Kejriwal why he provides water and electricity to Rohingyas and Bangladeshis living illegally in the city,” he said in a video message.

BJP leader Kapil Mishra also said that the documents of illegal tourists should be checked and they should be expelled immediately. The attack on Hanuman Jayanti procession was not a coincidence but an experiment. It was a terrorist attack. The population of Bangladeshi infiltrators is now involved in the attack.

of 10 people
The investigation report of the violence in Jahangirpuri will also be submitted to the Ministry of Home Affairs. Delhi Police has registered a case under Arms Act, Rights and Attempt to Murder. The case has been registered under various sections including rioting, obstructing government work and causing damage to property. The statements of the injured policemen are being taken. We are ready to identify the accused on the basis of their statements. According to the latest update, the police team has arrested 10 people so far.

Know what the police said
Megha Lal, who was sent to the first spot to report the altercation in the case, told how the bullet crossed the river escaping from the mob of rioters. In a conversation with Zee News correspondent Neeraj Gaur, the injured sub-inspector said that six policemen were injured. One of these is the bullet in the hand of Sub Inspector Meghnalal Meena. However, it is not yet clear how the bullet started. Meghalaya is currently out of danger. 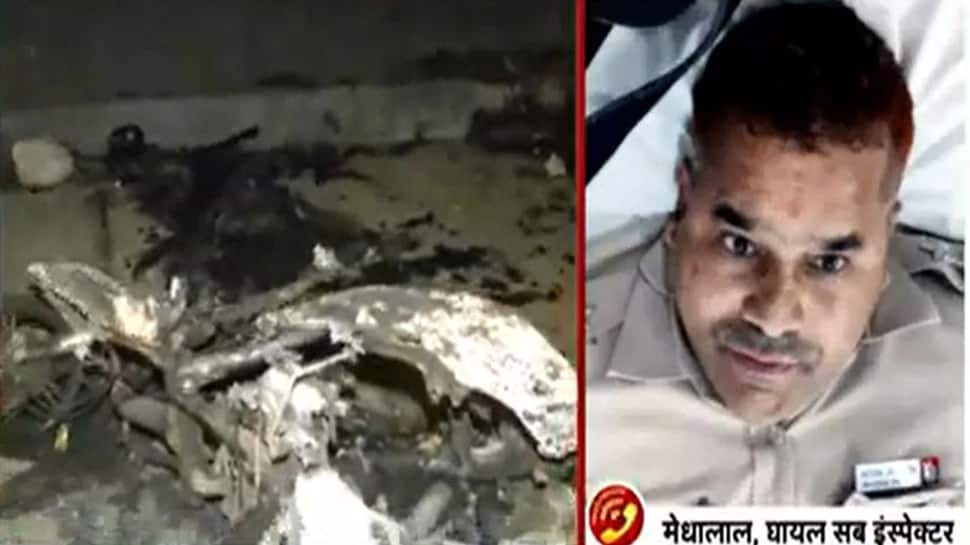 MP Hansraj Hanse late last night 10 teams visited the spot for investigation. Stones were pelted at a procession in Jahangirpuri. Six policemen were injured in the blast. Now the Special Cell of the Crime Branch is investigating the whole matter. 10 teams have been formed for investigation. All the policemen who were injured in the blast in Delhi have been admitted to Babu Jagjivan Ram Hospital. It is noteworthy that SI Meghnalal Meena, who gave information, is posted at Jahangirpuri police station.

after the violence
Alert issued in UP After this incident, alert has been issued in UP. UP ADG Law and Order Prashant Kumar said that all senior officers of Ghaziabad Police, Baghpat Police and Meerut were on constant patrol. Vigilance orders have been issued in the entire area. Strict action will be taken against those instigating the riots. We are under continuous surveillance 24 hours a day. We also refute false information by doing fact checking. That is, the UP Police is alert at every level.

“We are deeply saddened by the deliberate use of issues related to food, dress, faith, festivals and languages ​​by the establishment to polarize our society,” the statement said. We are deeply concerned about the increasing incidents of hate speech in the country by those who have received official protection and are not being prosecuted. We strongly condemn the recent incidents of communal violence in many states of the country.