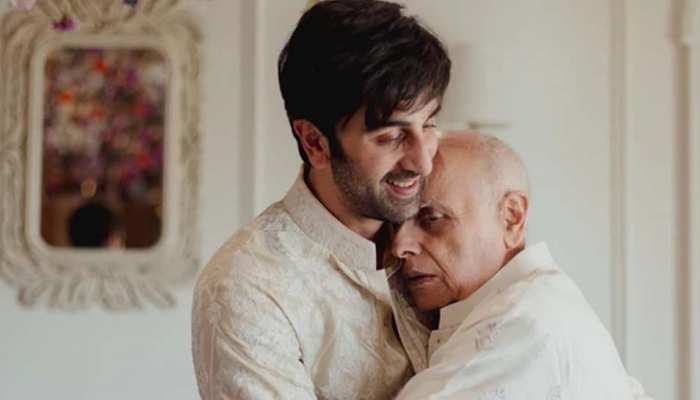 Ranbir Alia: Ranbir Kapoor and Alia Bhatt wedding pictures and videos are going viral on the internet. Meanwhile, some heart-touching pictures of Ranbir and his father-in-law Mahesh Bhatt have surfaced.

Ranbir Alia: Ranbir Kapoor and Alia Bhatt have tied the knot. The couple took seven rounds on 14 April and vowed to be together with each other for seven lives. Wedding photos and videos of Ranbir and Alia are going viral on the internet. Meanwhile, touching pictures of Ranbir and Alia’s father Mahesh Bhatt have surfaced.

These pictures have been shared by Pooja Bhatt on Instagram account, which have now become viral on social media. In the first photo, Mahesh is seen resting his head on the chest of son-in-law Ranbir Kapoor. At the same time, in the second photo, Ranbir and Mahesh are hugging each other. The bonding of son-in-law and father-in-law is visible in these pictures. It is believed that these photos of Ranbir and Mahesh were done during the wedding, which have now become a hit on the internet.

Posting these photos of Ranbir and father Mahesh Bhatt, Pooja Bhatt wrote in the caption, ‘Who needs words when there is the ability to listen and speak from the heart’. Fans are giving their reactions on Pooja’s post and are telling these photos to be the best in the beautiful moments of marriage.

Daughter-son-in-law’s name written on the palm

Earlier, Pooja Bhatt had posted a photo of Mahesh Bhatt, in which the henna on both his palms was visible. Mahesh had written the names of daughter Alia and son-in-law Ranbir with Mehndi on his palms. Pooja wrote in the caption, ‘Written in stars and written on papa’s palms. This is the name in the hearts too…for a lifetime’. Let us inform that Karan Johar, Saif Ali Khan, Ayan Mukerji, Kareena Kapoor, Karisma Kapoor, Randhir Kapoor and many veteran stars attended the wedding of Ranbir Kapoor and Alia Bhatt.