PM Modi and Biden will hold virtual meeting, Russia-Ukraine war can be discussed 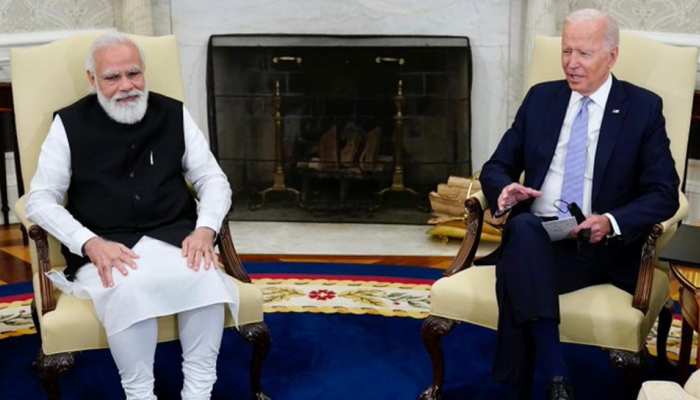 PM Modi Joe Biden Meeting: PM Modi and US President Joe Biden will hold a virtual meeting on Monday. In the meeting, talks can be held on bilateral issues as well as the ongoing war between Ukraine and Russia.

New Delhi: Prime Minister Narendra Modi and US President Joe Biden will meet on Monday. There will be a virtual meeting between the two leaders through video conferencing. In this meeting, along with bilateral issues, the ongoing war in Russia and Ukraine can also be discussed.

There will be a meeting between PM Modi and Joe Biden

This meeting between PM Modi and the US President is being considered important regarding the ongoing war in Ukraine-Russia. The 2 plus 2 talks between the US and India are also going to start next week, in which a high-level delegation along with the Foreign Minister and Defense Minister of both the countries will participate.

Virtual meeting will be held between the two leaders

The Ministry of External Affairs has informed that PM Narendra Modi will hold a virtual meeting with US President Joe Biden on April 11. The two leaders will review ongoing bilateral cooperation and exchange views on recent developments in South Asia, the Indo-Pacific region and global issues of mutual interest.

Russo-Ukraine war will be discussed

Regarding this meeting, the White House said that President Biden will discuss the consequences of Russia’s brutal war against Ukraine and reducing its destabilizing effect on the global food supply and commodity markets. Let us tell you that Biden last spoke to Prime Minister Modi along with other Quad leaders in March.

US President Joe Biden will meet virtually with Prime Minister Narendra Modi of India on Monday, April 11 to further deepen ties between our governments, economies, and our people, reads the statement of White House Press Secretary Jen Psaki

White House Press Secretary Jen Psaki said in a statement regarding the meeting that US President Joe Biden will have a virtual meeting with Prime Minister Narendra Modi of India on Monday, April 11 to further deepen the ties between our governments, economies and our people. will do.