Kia EV9 Electric SUV: This large-sized SUV will offer a range of up to 500 km on a single charge 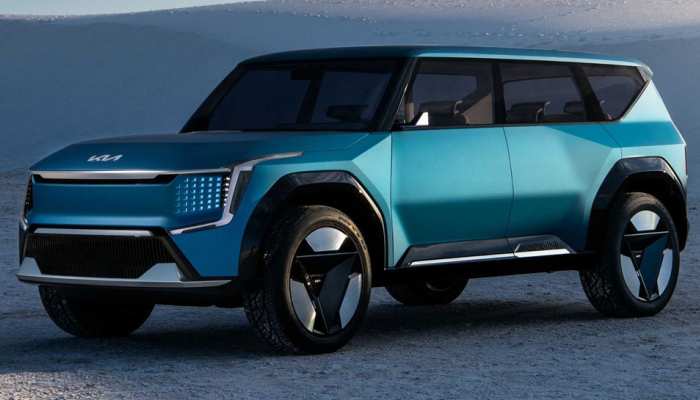 Kia Motors has confirmed the launch of the EV9 Electric SUV at the New York International Auto Show, which will be launched in the US market by early 2023. It is estimated that the large size SUV can be driven up to 500 km on a single charge.

New Delhi: Kia Motors has become the fastest growing company in the Indian market in a short span of time and the company is planning to bring many new fuel-powered and electric vehicles in the country. Kia is soon going to introduce some of the best electric vehicles globally, with big size SUVs also being worked on fast. One of these is the Kia EV9 which is eagerly awaited and will be launched in the US in 2023. There is every possibility that the company will launch this 3-row SUV in India after some time.

Electric SUVs to be 6 and 7-seater

The Kia EV9 is a three-line SUV that is likely to be launched in 6-seater and 7-seater variants. It is set to become the most expensive electric SUV from Kia. The company first showcased this car at the LA Auto Show in November 2021 and Kia has confirmed the launch of the EV9 at the New York International Auto Show. The electric SUV is being built on Hyundai Motors’ e-GMP platform which is specially designed for electric vehicles and will replace the EV9 at the top of the EV6 and EV7 in the company’s electric vehicle lineup.

Will run up to 500 KM in single charge

Introducing the Kia EV9, the Korean automaker has confirmed that the electric SUV will be provided with fast charging and will take just 30 minutes to charge up to 10-80 percent. It is being speculated that this sizable SUV will give a range of around 500 KM in a single charge. Apart from this, the cabin of the car will also be equipped with hi-tech features. The concept model comes with a much larger 26-inch fully digital display which can also be found with the production model. The SUV is of a large size, measuring 4,930 mm in length, 2,055 mm in width and 1,790 mm in height.