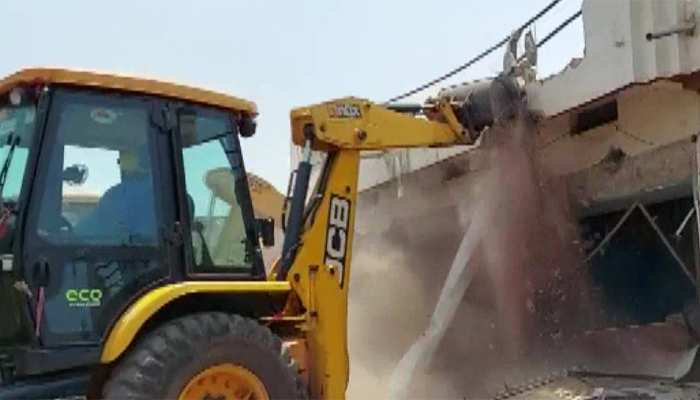 During the Ram Navami procession, there was an incident of stone pelting and arson in Khargone, after which there is an atmosphere of tension in the area. Now, taking strict action, the administration has decided to identify stone pelters and get bulldozers run on their property.

New Delhi: Shivraj government has taken strict action against those who pelted stones on Ram Navami procession in Khargone district of Madhya Pradesh. The administration has destroyed the property of stone pelters by running a bulldozer. According to the police, the situation is now under control and so far a total of 84 accused have been arrested in this case.

Curfew has been imposed in the entire city after stone pelting and arson in Ram Navami procession. The police have so far arrested 84 people in this case. Khargone Superintendent of Police (SP) Siddharth Choudhary was shot in the violence and besides him at least 24 people, including six policemen, were injured. After incidents of stone pelting and arson in some houses and vehicles on Ram Navami processions on Sunday, the police had to lob tear gas shells.

MP | The Khargone administration has decided to demolish the properties of stone pelters during the Ram Navami procession. Police have taken the matter under control. 84 accused have been arrested. Curfew has been imposed in Khargone: Pawan Sharma, Divisional Commissioner, Indore pic.twitter.com/pEhyvoSwAO

Terming the incident as “unfortunate”, Chief Minister Shivraj Singh Chouhan said that the damage caused to public and private properties would be compensated by the rioters. He said, ‘The rioters have been identified and they will not be spared. Strict action will be taken against them and there is no place for rioters in Madhya Pradesh.

‘Strict action will be taken against the rioters’

Chouhan said in a statement, “We have passed the Public and Private Property Recovery Act. We are setting up a Claims Tribunal under the Act and after assessing the damage, the same will be recovered from the rioters. At present, the administration has run a bulldozer on the property of the accused.

A similar incident of stone pelting had come to the fore in Sendhwa town of Barwani district during Ram Navami procession, in which a police station in-charge and five others were injured. According to officials, the situation has been brought under control after the incident.

Tension in the area, curfew imposed

According to the order issued from the office of Khargone District Magistrate Anugrah P, since the incident of Sunday evening, curfew has been imposed in the entire Khargone city. On Sunday, when the Ram Navami procession started from Talab Chowk area in Khargone, the procession was pelted with stones.

Khargone’s Additional District Magistrate Sumer Singh Mujalde said the procession was supposed to circle the city but it was halted midway after violence. According to the District Magistrate, people have been advised to come out of the house only in case of emergency. He also said that strict action will be taken against those sharing objectionable messages and videos of Khargone incident on social media.