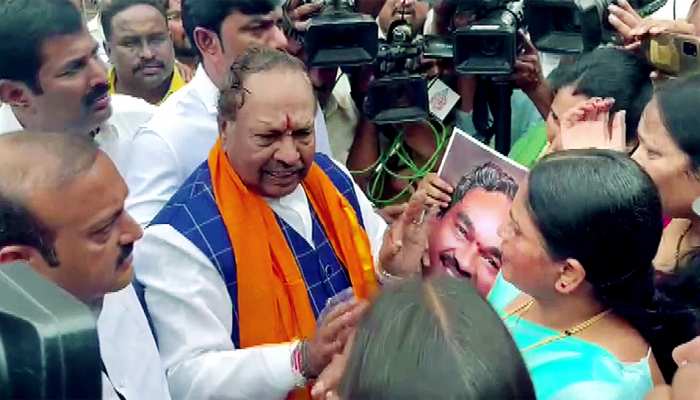 KS Eshwarappa Resigns: Karnataka minister Eshwarappa had been continuously refusing to resign. But now he does not want any further damage to the party because of himself and that is why he has resigned from the post on Friday evening.

Karnataka Minister Eshwarappa Resigns: Karnataka Panchayati Raj Minister KS Eshwarappa has resigned from his post. He reached the Chief Minister’s residence on Friday evening and submitted his resignation to him. The minister was booked for abetment to suicide over the death of a contractor named Santosh Patil, after which he was under constant pressure to resign.

The opposition party Congress was adamant on the demand for his arrest and resignation. Although earlier Eshwarpa had been refusing to resign. But now he does not want the party to suffer because of his own reason and that is why he has resigned from the post on Friday evening.

Eshwarpa has been claiming that he is innocent and he says that he has no involvement in this matter. At the same time, he has demanded an inquiry into the matter at the earliest so that his situation can be cleared. When Eshwarpa was meeting the Chief Minister, hundreds of his supporters were shouting slogans outside the Chief Minister’s residence for not resigning from him.

Karnataka Chief Minister Basavaraj Bommai had already announced the resignation of Eshwarappa. The Chief Minister had said that he is confident that he will be acquitted of all charges in this case, the truth will come out in the investigation. Bommai said that since the police will conduct a fair investigation on all aspects of the case, there is no need for Congress leaders to become investigating officers, judges and prosecutors in the case. There will be an open inquiry and the truth will come out.

Please tell that contractor Santosh Patil was found dead in a lodge in Udupi. Shortly before this, he had sent a message to a friend, in which he held the minister Eshwarappa responsible for his death. It is being told that a few days before his death, Santosh Patil had also written a letter to Prime Minister Narendra Modi, in which he had alleged that Eshwarappa was demanding 40 percent commission from him in return for work. At the same time, Eshwarappa is claiming that he does not know Patil, all the allegations against him are false.