BJP repeated the old strategy in Tripura, the formula was effective in these states 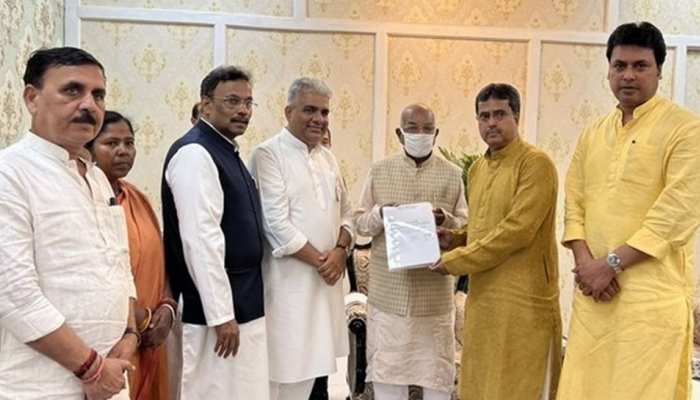 Tripura BJP Politics: Before the assembly elections in Tripura, BJP has again adopted the same strategy, which has benefited the party in many states. Now it remains to be seen how effective this formula of BJP will prove to be in Tripura.

Tripura BJP Politics Latest Update: The Bharatiya Janata Party (BJP) in an attempt to overcome the anti-incumbency wave in Tripura indirectly and to quell any dissatisfaction within the party office-bearers, has announced its strategy to enter the state assembly elections with a fresh face. Adopted which has been successful in the past as well. Biplab Kumar Deb on Saturday resigned as the Chief Minister of Tripura. Within hours of this, the party’s state legislature party elected Manik Saha as its new leader. Manik Saha will take oath as the Chief Minister of Tripura on Sunday.

With Uttarakhand’s bid to change the chief minister successful just ahead of the polls, top BJP leaders have opted for a similar change in Tripura, where elections are due early next year. The BJP has replaced five chief ministers including Gujarat and Karnataka since 2019. Saha is the fourth former Congress leader from the Northeast to become the chief minister of the region after joining the BJP. This is a clear indication that the electoral value of any leader is paramount for the party.

prefer to work on the ground

Himanta Biswa Sarma of Assam, Pema Khandu in Arunachal Pradesh and N Biren Singh in Manipur are other chief ministers who were earlier in the Congress. Though the opposition has targeted the BJP for removing its chief ministers, political observers believe that these changes underscore the party leadership’s readiness to analyze the ground situation and act accordingly. A BJP leader said that there were broadly three factors behind the change of chief ministers in the last two-three years. These are ‘work on the ground, keeping the organization in good shape and the popularity of the leader.’

Realized after defeat in Jharkhand

Prime Minister Narendra Modi, who was the Chief Minister of Gujarat from 2001 to 2014, has been in favor of giving freedom to the Chief Ministers to act according to his own mind, but after the defeat of the BJP in the Jharkhand Legislative Assembly elections as well as Chief Minister Raghubar Das himself losing his seat. The party realized the need for a leadership change.

BJP has made such changes in many states

Sources said that within days of the announcement of the election results, the BJP brought back its former leader Babulal Marandi, who had floated his own political party. In September last year, the BJP replaced Vijay Rupani with Bhupendra Patel as the chief minister of Gujarat, who comes from the numerically important Patel community in the state. Changing the Chief Minister in Karnataka, BJP replaced BS Yeddyurappa, who comes from the Lingayat community, with another Lingayat leader Basavaraj S Bommai as the Chief Minister of Karnataka.

The party did the same in Uttarakhand and Assam.

The BJP appointed another Thakur leader in place of two Thakur Chief Ministers in Uttarakhand. After the assembly elections in Assam last year, the BJP had made Himanta Biswa Sarma the chief minister in place of Sarbananda Sonowal, who had been chief minister for five years. However, it was considered more by the party to reward Sarma.