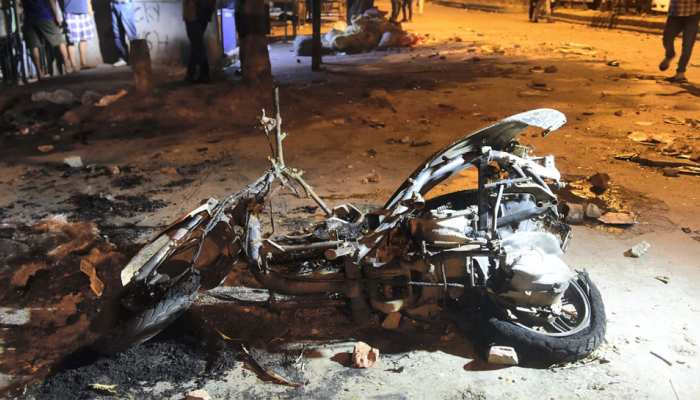 Delhi Violence: Violence erupted after stone pelting in a procession taken out during Hanuman Janmotsav in Jahangirpuri area of ​​Delhi in which several policemen were injured.

Delhi Jahangirpuri Hinsa: Violence erupted after stone-pelting in a procession taken out on Hanuman’s birth anniversary in north-west Delhi’s Jahangirpuri area on Saturday, injuring several policemen. In this case, the police said that stone pelting took place and some vehicles were set on fire. Delhi Police Commissioner Rakesh Asthana warned of strict action against the rioters, saying the situation is under control and additional security personnel have been deployed in Jahangirpuri and other sensitive areas.

Read all the big updates related to this violence

1. The ruckus started with Kushal Cinema

According to the police, when the procession reached near Kushal Cinema, some people pelted stones from behind. After this a situation of stampede happened. People started running here and there. Many videos are coming in which the atmosphere of chaos can be seen. It has been told that when the police tried to handle the situation on the spot, they were also attacked by the miscreants.

Delhi Police Commissioner Rakesh Asthana spoke to Zee News regarding this violence. In this conversation, he said that the situation is still under control. He also said that strict action will be taken against the miscreants. All the senior police officers reached the spot. He has told people through Zee News not to spread rumors nor pay attention to rumours. Call the police to give and confirm any information.

3. Investigation started after registering a case

There is a continuous flag march at the place of violence. After controlling the situation, the police have registered a case in this regard under other related sections including rioting. About half a dozen people have been taken into custody and interrogation has also been started. About half a dozen teams of the district including the police station have been deployed in the investigation. The CCTV footage of the spot is being scanned.

In this matter, the Chief Minister of Delhi said that it is the responsibility of the Delhi Police and the Central Government to stop the violence. He asked the people to maintain peace and order.

5. Policemen were deployed in security

A police officer said, ‘It was a traditional procession and police personnel were deployed in security. However, as the procession reached near Kushal Cinema Hall, a clash broke out between the two communities. He said that the policemen present on the spot were injured while trying to stop the violence.

Sources said that Union Home Minister Amit Shah spoke to the Commissioner of Police and Special Commissioner (Law and Order) after the violence and directed to take all necessary action. The Delhi Police also apprised the top officials of the Union Home Ministry about the violence that took place during the procession. Sources said that the Home Ministry has given necessary instructions to the Delhi Police and is closely monitoring the situation.