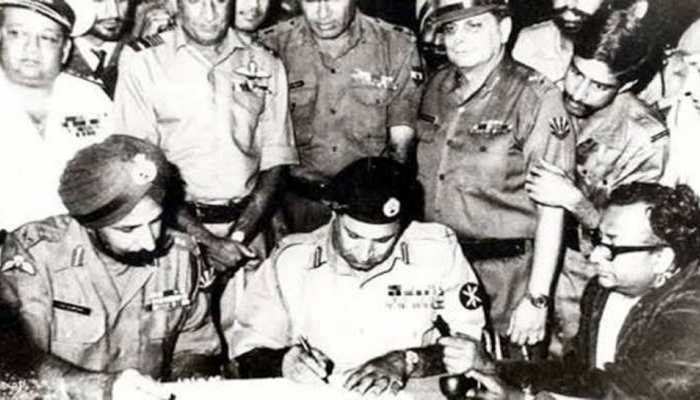 Indo-Pakistan 1971 War: The former Indian Navy chief said that among the reasons for the victory was the gathering of vital intelligence by the Mukti Bahini as well as the coordination between the three wings of the armed forces – Army, Navy and Air Force.

Jaipur: Former Indian Navy chief Admiral Madhavendra Singh (retired) on Monday said that there was no plan to take over Dhaka in the Indo-Pakistan conflict of 1971. Delivering a speech at the ‘Militaria 2022’ held here, he said the conflict did not end with any major losses in the western sector or gains in land, rather it was a remarkable victory in the eastern sector in Bangladesh.

The former Indian Navy chief said that the reasons for the victory were important intelligence gathering by Mukti Bahini as well as coordination between the three wings of the armed forces — Army, Navy and Air Force. Describing the victory in the eastern sector as the capture of Dhaka by Indian forces a resounding success, he said that the decision to cross the Meghna River and move to Dhaka to capture it was that of the 4 Corps Commander, Lt Col General Sangat Singh. . “However, they have not received their due recognition and respect for this glorious victory, although they have been recognized by the Bangladesh government,” he said. Admiral Singh also said that his service during the 1971 war was commendable.

Pak Air Force could not attack at night

“The bombing of Karachi by Indian naval ships was a laudable act. Since the Pakistani Air Force could not attack during the night, the naval operation took place at midnight. Admiral Singh said, ‘In the eastern sector also, the Indian Navy played an important role by bombing Chittagong and Khulna in Bangladesh. Let us not forget the destruction of Pakistani submarine Ghazi. “However, the loss of INS Khukri was a setback for the Indian Navy,” he said.

There’s a lot to learn in victory

According to him, intelligence gathering by the Indian forces during the 1971 conflict was an impeccable achievement. ‘There is much to be learned in victory too and we keep on learning new aspects of the 1971 victory.’ Militaria founder Maroof Raza said he was excited to bring the second edition of Militaria back to the city. “The kind of response they are getting is inspiring and there may be a full-fledged Military Literature Festival in Jaipur in the coming times,” he said.

The next edition will take place in February 2023.

The speaker of the session ‘General on Technology’ was Lt Gen Rajiv Sabharwal (Retd), former Signal Officer and former Deputy Chief of the Indian Army, Integrated Defense Staff Lt Gen PJS Pannu. Lt Gen Sabharwal highlighted the different types of wars like Platform Centric Warfare, Network Centric Warfare, Information Centric Warfare and Knowledge Centric Warfare and said that in the times to come, the war will be fought simultaneously in all areas and at all levels.