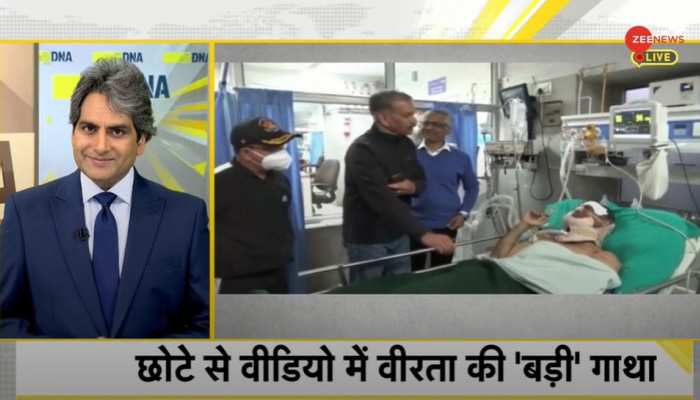 DNA on Spirit of Indian Army: Today we are going to show you a video of the conversation of the soldiers of the Indian Army, knowing the full story of which your chest will be widened with pride.

DNA on Spirit of Indian Army: The news we are going to tell you is related to the morale of our soldiers. The passion you will see in this is the spirit that keeps you and this entire country safe from your enemies. Here are two videos in which you will see the conversation of Army Corps Commander with an ASI of CRPF who was injured by terrorists’ bullets in Srinagar. In which the Corps Commanders are encouraging the ASI and assuring it that the terrorists who have created this condition for them will definitely be avenged. The Corps Commander also fulfilled his promise and met this ASI for the second time.

On April 4, terrorists attacked the CRPF camp in Maisuma, Srinagar. In which a head constable was martyred and ASI Niranjan Singh was shot in the jaw. This video is from when the commander of Chinar Corps, Lt Gen DP Pandey had reached to meet ASI Niranjan Singh, who was admitted to the Army’s Base Hospital in Srinagar. Niranjan Singh was not in a condition to speak at that time. He told the commander in gestures that those people should not be abandoned. The Corps Commander assured Niranjan that don’t worry, he will not leave those terrorists alive. The ASI lying on the bed was very angry about the terrorists. On this, the Corps Commander said that keep this anger, it will come in handy in the coming days.

#DNA : Video analysis of the spirit of the Indian Army@sudhirchaudhary

came to meet again after fulfilling the promise

The promise made by the Corps Commander was also fulfilled. Both the terrorists who attacked the CRPF camp were of Lashkar-e-Taiba and were Pakistanis. Both the terrorists were killed in a joint operation by CRPF in Bismber Nagar of Srinagar on 10 April. After this, Lieutenant General DP Pandey once again reached the base hospital to meet ASI Niranjan Singh and gave him the good news that both had been killed. The ASI told the commander that the terrorists had shot from behind, otherwise he would not leave them. So the commander said, don’t worry, I will give you a chance to take revenge.