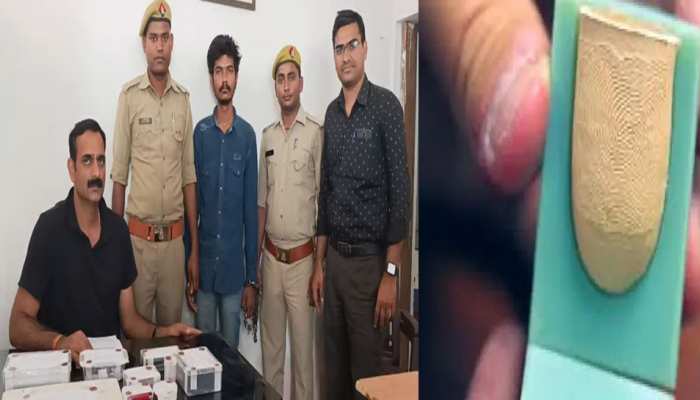 Cyber ​​forgery with clone of thumb: A big fraud of customer service center operator has come to the fore in Azamgarh. Police has arrested one accused in this case.

Cyber ​​fraud with clone of thumb in Azamgarh: Azamgarh Police has busted the gang involved in cheating and arrested an accused. The accused was committing the fraud through the Customer Service Center (Grahak Sewa Kendra) by cloning the thumb impressions of the people.

Threat on security of ‘Aadhaar’

The vicious thug who has been arrested by the police. He used to cloning the thumbs of customers under the guise of his customer service center and withdraw money from their bank accounts. According to the police, he has made 165 people his victim so far. With the help of his finger print clone, about 15 to 20 lakh rupees have been cheated.

Learned fraud a year ago

According to the police, the accused had learned to clone finger prints a year ago while working at a customer service centre. The accused carried out the forgery through AEPS. He was so clever that he did not even let the people who were victims of the loss get a clue. During the interrogation of the police, the accused told that earlier he used to run the customer service center. During that time Ajit Singh, a resident of Robertsganj district, Sonbhadra, taught him to clone fingerprints. In an attempt to get rich quickly, he had targeted many people. According to an estimate, the accused has made about 165 people a victim.

According to the accused, in such cases, often by luring money to the needy, customer service center agents opened accounts in banks and kept the ID, password, ATM card, check book, passbook, internet banking kit of the person concerned. After obtaining Aadhar card number and finger print from the registry papers of the people, clone their fingerprints and transfer money from bank account to CSP account / Customer Service Center Agent account and then withdraw money from ATM by transferring money to various bank accounts.

The victim of this fraud in Azamgarh, Mohd. Mehnajpur, a resident of Ghaffar Khan, gave a complaint that someone had withdrawn two lakh rupees from his bank account through Aadhaar card. On the basis of Tahrir, the police registered a case and got involved in the exercise of investigation. During the investigation, the name of a customer service center operator came to light. On which the police raided and arrested the center operator.