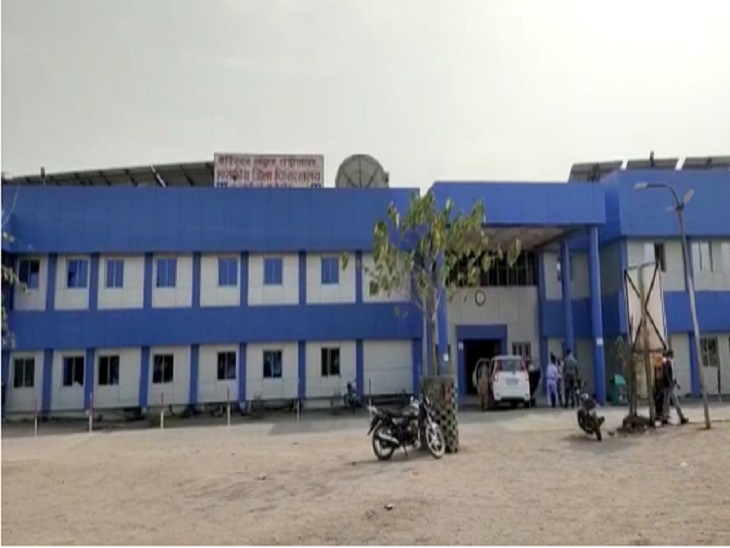 Patients coming to the hospital for treatment are facing a lot of problems these days.

With the increasing cases of corona in Chhattisgarh, the situation in Janjgir district has also become worrying. The most troublesome thing has come to the fore here that most of the frontline workers are falling prey to Corona. In Janjgir district hospital alone, 43 staff including 15 doctors have been infected in a week. Due to which the problem has increased from normal patients to Kovid patients as well. The population of 17 lakhs of the district is dependent on this district hospital only.

Corona patients were coming less before the new year. Even from January 1, the figures were less than these days. But in a week these figures are continuously going beyond 100. 43 people of Janjgir District Hospital are also included in these infected patients. Those who have become infected within the last one week.

these people got infected

These infected doctors include Hospital Superintendent Dr Anil Jagat, Medical Specialist, Dentist, Anesthesia Specialist, Child Specialist, Computer Operator, Nurse, Ward Boy to Chowkidar. It has been told that apart from 15 doctors, 15 staff nurses, 3 computer operators, 2 lab technicians and 7 other people are vulnerable to infection. All treatment is going on.

On the other hand, if we talk about the total doctors in this hospital, then a total of 22 doctors are posted here. Out of which 15 doctors are infected these days. A doctor has gone on training. A doctor is suspended. Altogether, these days the hospital is run on the basis of only 5 doctors. That is the biggest problem.

Trouble increased for Kovid patients too

The trouble did not end here. Kovid Hospital has also been built behind the district hospital. It has been learned that there were many doctors among these doctors who were treating these patients. But now they have turned positive. However, most of the patients in the district are being treated in home isolation. Nevertheless, there are many patients who are admitted in this Kovid center.

I am coming since 2 days, did not get treatment

If we talk about the staff of the entire hospital, then there are a total of 215 staff including 22 doctors. Out of which 43 are infected. Every day people from all over the district come here for treatment. But these days the patients coming for treatment are very upset. Makhan Singh, who came from Sakti, says that he is coming to the hospital for dental treatment for the last two days. But the doctors treating both the teeth are infected. Because of which he is unable to get treatment. The same is the case with other patients.

in a week’s time 1556 patients, 2 deaths also, the figure is increasing

RT-PCR lab incomplete for 10 months in Janjgir: CT scan machine in lock since 3 months; Vaccination stuck at 55%, 258 infected were found after the new year

Dainik Bhaskar also tried to talk to Dr. SR Banjare, the CMHO of the district regarding this matter, but could not talk to him. Some other officials of the department say that alternative arrangements are being made. Soon the system will improve.