Rajasthan Royals climbed to the top of the IPL 2022 points table after beating Faf du Plessis-led Royal Challengers Bangalore by 29 runs in Match No. 39 at the MCA Stadium in Pune on Tuesday (April 26). Royals now have 12 points from 8 matches, on par with Gujarat Titans, who have played one game less.

However, the Royals have a better NRR of 0.561 as compared to the Titans’ 0.396 which has placed them at the No. Hardik Pandya’s Titans can once again regain the No. 1 position by defeating Sunrisers Hyderabad in Match No. 40 on Wednesday (April 27).

On the other hand, RCB remain at the fifth position with 10 points from 9 matches so far with 5 wins and 4 losses. There is concern for the du Plessis-led side as they have now lost two matches in a row.

Check out IPL 2022 points table after RCB vs RR match… 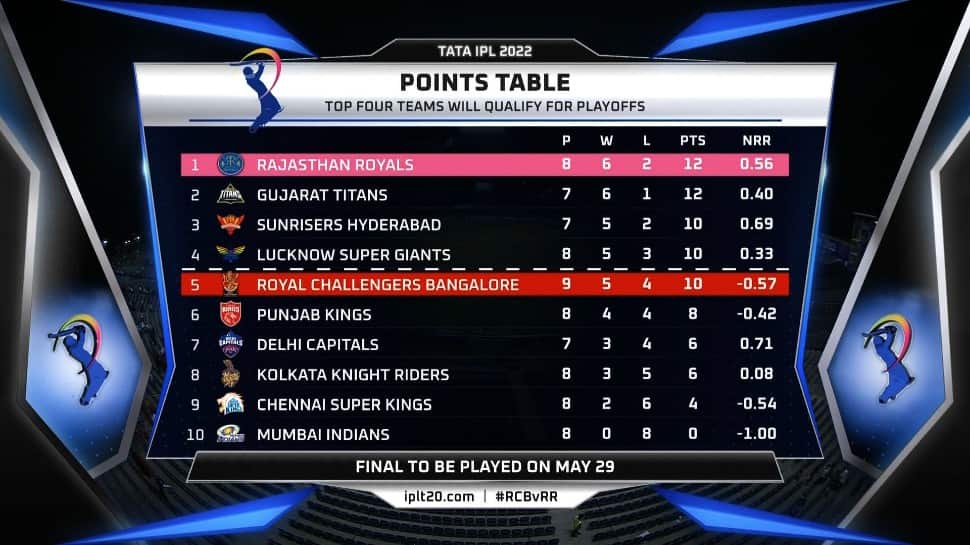 Royals opener Jos Buttler suffered a rare failure against RCB on Tuesday night but continued to lead the Orange Cap race with 499 runs from his willow in 9 matches. Buttler is also the player to hit the most sixes in IPL 2022 with 32 maximums.

Du Plessis moves up to 5th position in the batsmen’s list with 278 runs from 9 matches , but failed to reach a big total as he was dismissed for 23 off 21 balls against the Royals. Lucknow Super Giants captain KL Rahul (368 runs) and Punjab Kings opener Shikhar Dhawan (302 runs) are second and third in the Orange Cap list.

Hardik Pandya could move up from the fourth spot as he prepares to bat against SRH on Wednesday. Pandya has 295 runs in 6 matches.

For the first time this season, purple cap holder Yuzvendra Chahal went without a wicket in a match. However, Chahal leads the Purple Cap race with 18 wickets in 8 matches.

SRH pacer T. Natarajan, who is second with 15 wickets in 7 matches, could look to be ready to face the Titans. RCB spinner Wanindu Hasaranga moved up to the fourth spot and now has 13 wickets from 9 matches. Chennai Super Kings all-rounder Dwayne Bravo is in third place with 14 wickets in 8 matches.