New Delhi: Bollywood actress Zareen Khan is going through a difficult phase these days. The actress’ mother has been admitted to the hospital. Zareen Khan has appealed to the fans to pray for her speedy recovery. Zareen Khan was last seen in the film ‘Hum Bhi Akele Tum Bhi Akele’. He has told the fans about his mother’s health through social media.

Zareen Khan is very active on social media. She also often shares special pictures and videos to stay connected with her fans. Zareen Khan has shared a post on the story of her official Instagram account. In the post, he said that his mother’s health suddenly deteriorated and she had to be admitted to the hospital late at night. 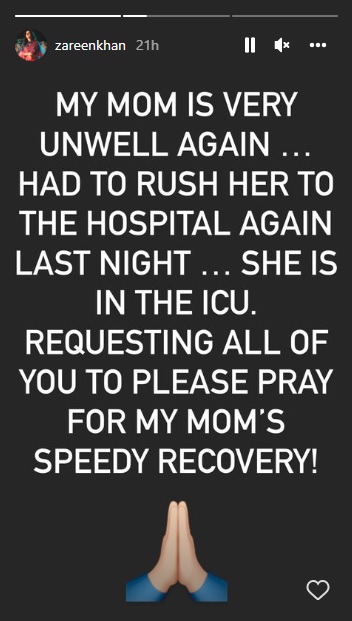 Significantly, Jazreen Khan started her career in Bollywood with Salman Khan’s film ‘Veer’ in 2010. Salman Khan gave him the first chance in this film. Although the film Veer proved to be a flop in theatres. After this Zareen Khan appeared in films like Housefull 2, Hate Story 3, Vajha Tum Ho and Akshar 2.