The farmer made such arrangements to welcome the newborn granddaughter, everyone was surprised to know 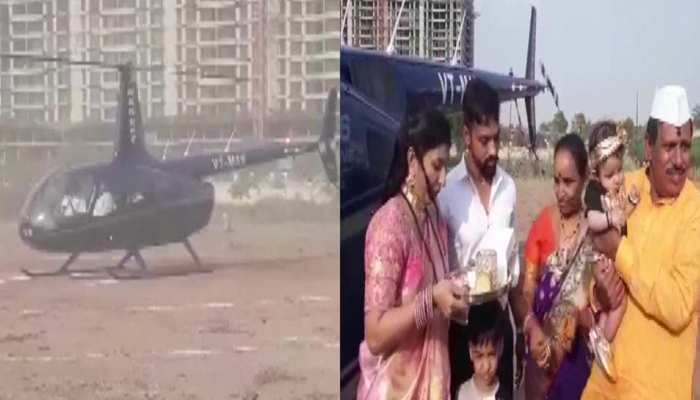 Farmer hired helicopter: Vigorous arrangements were also made to welcome the newborn baby at the farmer’s house. The street was decorated for the daughter and she entered the house with fireworks.

Farmer hired helicopter for newborn granddaughter: The condition of the farmers of Vidarbha region of Maharashtra has been a topic of discussion all over the world. This is the area of ​​the country where farmers are considered very poor and suicide cases keep coming from here. But a farmer from the same Maharashtra did something for his granddaughter which is being discussed everywhere.

A farmer in Pune district was so happy at the birth of his granddaughter that he arranged for a helicopter to bring the newborn home on Tuesday. Ajit Pandurang Balvadkar, a resident of Balewadi area of ​​Pune, told that he wanted to give a grand welcome to his granddaughter Krishika.

Maharashtra | Ajit Pandurang Balwadkar, a farmer from Balewadi hired a helicopter to bring his newborn granddaughter and daughter-in-law to his house in Balewadi from the maternal house of the daughter-in-law in Shewalwadi in Pune. (26.04) pic.twitter.com/T9dR8gxVqe

Balvadkar said that when the time came to bring the newborn home from his maternal grandmother’s house with his mother, he booked a helicopter for it. The whole family reached to welcome the new guest and the child was dropped off by helicopter and brought home.

Not only this, complete arrangements were also made to welcome the girl at home. The entire street was decorated and the girl was welcomed into the house with fireworks. Photos and videos of this incident have gone viral on social media. Everyone is appreciating this step of the farmer.

In the country, many daughters are killed in the hope of having a son. In many cases, even after birth, cases of murder of a newborn daughter have come to the fore. In such a situation, Balvadkar of Pune is an example, who has celebrated the birth of a daughter in his house as a festival.