Administration in action after the murder, suspended the license of Garden Galleria’s bar 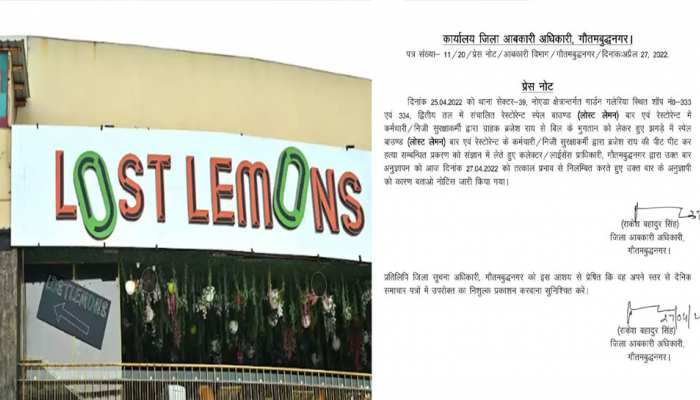 Noida Bar Murder Case: In connection with the murder of a person who had gone to a party in a restaurant located in the Garden Galleria Mall, the police on Wednesday arrested 7 people and are scanning the CCTV. Along with this, the license of the bar was also issued on the orders of the DM of Noida.

Noida Bar Murder Case: Police on Wednesday arrested 7 people in connection with the murder of a person who had gone to a party at a restaurant located in Garden Galleria Mall, Noida. One of the accused involved in this incident is unknown and one is absconding. So far, a case has been registered against a total of 9 people.

Also, the DM of Noida suspended the license of Lost Lemons bar in Garden Galleria. Noida administration is very strict regarding this matter and CCTV footage of the incident
Investigating.

Who is the unknown person?

Noida Police is searching for the person who is still unknown on the basis of CCTV footage. She is wearing a white shirt. An unknown person has been seen beating the deceased Brijesh badly. According to the police, this accused is neither the staff of the bar nor the staff of Galleria Mall. The police suspect that he belongs to a nearby mall or bar who was present inside at the time of the incident, after which several teams have been set up to trace him.

Man died due to beating with kicks and fists

It is also clear from the CCTV footage that Brijesh was thrashed fiercely with kicks and bribes. After this incident, security will be increased by Noida Police outside all pubs, bars, malls. A campaign will be launched to check the criminal background of the security guards of the bars and malls, the licenses of all the bars will also be checked. Along with this, a drunken drive campaign is being started by the traffic police. Apart from this, the investigation is still going on, in this, those who will be directly involved in this will also be done against them.