Major accident during temple festival in Tamil Nadu, 10 killed, 15 injured due to electrocution 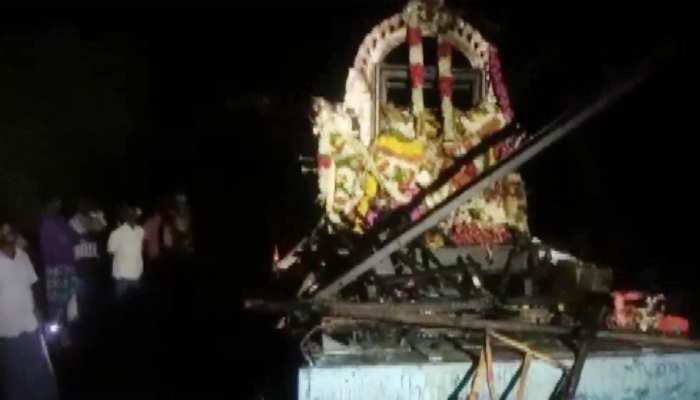 Thanjavur Accident: This accident happened on Wednesday morning during the temple festival in Thanjavur. According to the information, the chariot of the procession came in contact with the electric wire and 10 people lost their lives due to electrocution.

Thanjavur Accident: A major accident has happened in Thanjavur, Tamil Nadu. The incident took place during a temple festival in Thanjavur district on Wednesday morning, in which 10 people have lost their lives due to electrocution. According to the information, during the procession, the chariot came in contact with the high tension wire passing above, after which the current spread on the entire chariot and caught fire.

During the Rath Yatra, the devotees were passing through the road, when somehow the electric wire passing from above came in contact with the chariot and the current spread. There are also reports of many people getting injured and burnt in this accident. High officials reached the spot and did relief and rescue work.

#UPDATE , As of now, 10 people died & 15 others suffered injuries after a temple car (of chariot festival) came in contact with a live wire in the Thanjavur district. FIR was registered in the matter: V Balakrishnan, Inspector General of Police, Central Zone, Tiruchirappalli pic.twitter.com/oM5YBGcyE6

Area IG V Balakrishnan said that so far 10 people have died in this accident and 15 people are injured. He said that during the procession, the chariot came in contact with a bare electric wire, after which the accident took place.