Indian woman wore a sari in Korea’s wedding, the people there were left watching 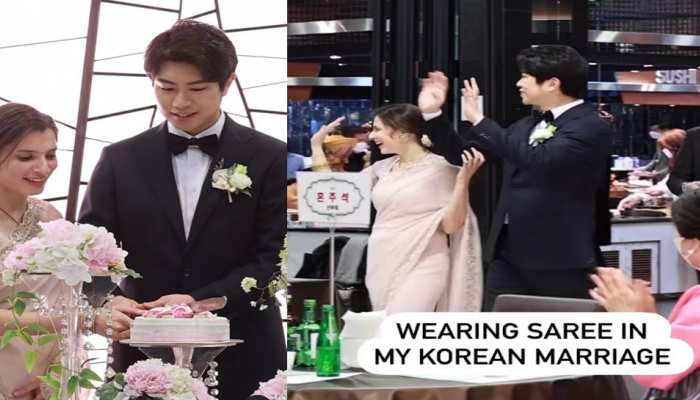 Viral Video On Social Media: In a video that has gone viral on social media, an Indian woman is getting married with a Korean man. The special thing is that even in the Korean wedding, this woman wore a sari without forgetting the Indian culture.

Indian Woman Wears Saree In Korean Wedding: Every day something goes viral on Instagram. On the video of one such wedding (Korean Wedding), Instagram users are lavishing a lot of their love. Actually, in this video, people of two countries are seen dressing up according to their culture and performing wedding rituals.

The Indian bride’s name is Neha and the Korean groom’s name is Jongsoo. Their marriage is becoming very viral on the internet. At present, both of them are living in Seoul, the capital of South Korea. More than 1.4 lakh people have become his fans on his Instagram page.

The entry of the bride and groom can be seen in this viral video. In this, the bride is looking amazing wearing a sari, while the groom is also looking no less in his suit. Many social media users congratulated both of them. Many Instagram users prayed for this couple. You also watch this viral video…

Many people also praised Neha for wearing a sari while staying connected to Indian Routes. Neha writes in the caption, Wearing Saree In My Korean Marriage. Very soon this video has been seen by 9.7 million people.