Alwar: On foot march against the demolition of the temple, BJP will continue to oppose the Mughal mentality 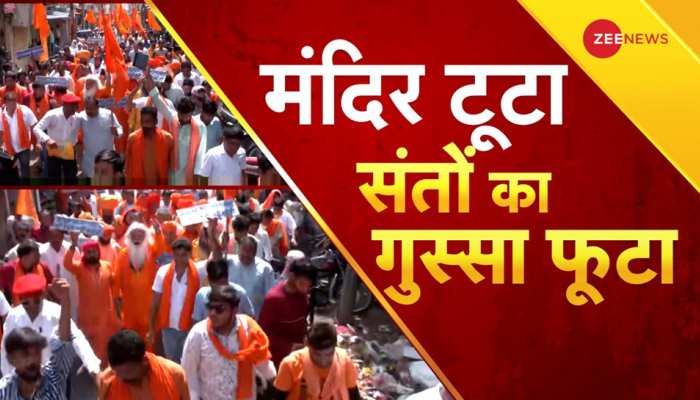 Alwar temple demolition: BJP general secretary Vijayvargiya alleges that a Muslim shop in the same area of ​​Alwar was not even tampered with but action was taken against the temple. He said that BJP will always oppose such Mughal mentality.

Alwar Temple Demolition: On Wednesday, Hindu organizations took out a foot march against the demolition of the temple in Alwar, Rajasthan. In this demonstration, all the sages and saints, including the MP of the area, Balaknath took part. Apart from this, a large number of people gathered outside the collectorate and lodged their protest.

BJP MP Balak Nath, who was involved in the protest, said that the Rajasthan government is doing the politics of appeasement and we have submitted a memorandum and demanded strict action against the officials involved in the demolition of the temple. The MP said that after this matter, now Chief Minister Ashok Gehlot should resign.

BJP general secretary Kailash Vijayvargiya said that many illegal constructions around the temple in Alwar were not demolished while only the temple was targeted. He said that the Rajasthan government has done the work of demolishing the temple through appeasement politics and there is resentment among the public against it.

Vijayvargiya alleges that a Muslim shop in the same area of ​​Alwar was not even tampered with, but action was taken against the temple. He said that BJP will always oppose such Mughal mentality. He said that Hindu society is being targeted in Rajasthan.

The BJP general secretary accused the Gehlot government of Congress and said that anarchy has been spread in Alwar and the government is working to protect a particular class. He said that unilateral action is being taken only on the houses and temples of Hindus.

Seeing the growing controversy over the demolition of the temple, the Rajasthan government has suspended the Chairman and Executive Officer (EO) of Rajgarh (Alwar) Municipality. The Autonomous Government Department has issued an order in this regard.

Rajgarh, Alwar sub-divisional officer Keshav Kumar Meena (RAS) was also suspended on Monday. The controversy started over the demolition of a temple in Rajgarh Municipality area on April 17 during the anti-encroachment drive.