On the day of marriage, the groom got the pleasure of ‘Pushpa’, started doing such an act in front of the bride 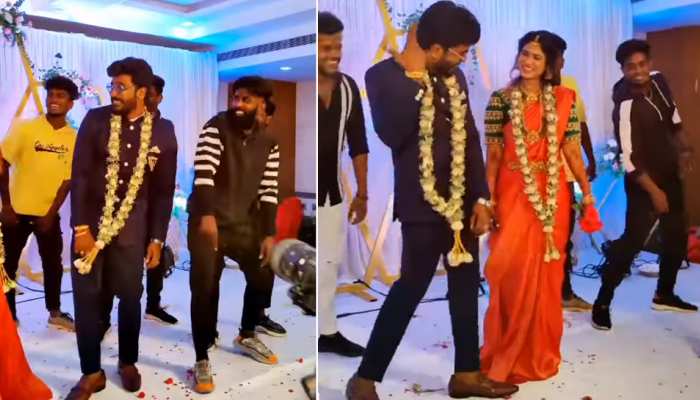 Bride Groom Video: A great video of the bride and groom is becoming fiercely viral on social media. People are very fond of it. Netizens are also not forgetting to comment on such videos.

Wedding Video: Ever since Allu Arjun and Rashmika Mandanna starrer film ‘Pushpa: The Rise’ was released in the country, its songs, dance and dialogues have created panic in social media. Today, the dialogue of ‘Pushpa’ is on almost everyone’s tongue. Pushpa’s happiness is also speaking on everyone’s head. On the dance steps of Allu Arjun, there has been a flood of reels in Instagram.

The groom danced vigorously on the song Srivalli

Meanwhile, at the time of Jayamala on the stage, a groom got to see the fever of the film ‘Pushpa’. Actually, when the bride was going to put a jaimala to her groom, the groom called his friends on the stage. After this, all of them together start dancing on the song ‘Srivalli’. As the groom was moving closer to his bride, his friends were dancing behind him. The splendid style of the groom was liked by everyone. In the end, the groom also showed off his ‘Main Jhukunga Nahi’ style in front of the bride.

Guests were stunned by the unique style of the groom

Seeing this unique style of the groom, along with the bride, the people present there were also surprised. The video of this moment is going viral on social media. It can be seen in the video that Jaimala’s program is going on on the stage. People from the bride and groom’s side are also eagerly waiting for Jaimala. At the same time, the bride laughs and points towards the groom. Then the groom starts dancing on the song ‘Srivalli’ during Jayamala. As soon as this video was uploaded on Instagram by the account named navin_anna__fanpage, it was liked by the people. Many other users also gave their feedback on this video.