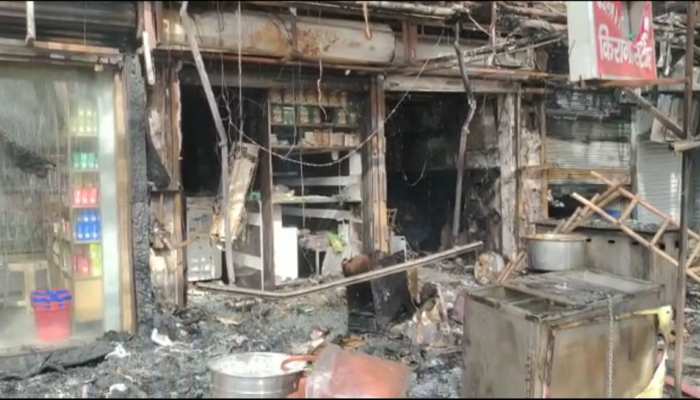 Fire in Delhi Lajpat Nagar Market: There was a stir in the Amar Colony market of Lajpat Nagar in the capital Delhi when a short circuit caught fire in the food shops in the market on Tuesday. The fire increased so much that it engulfed 5 nearby shops. Many houses were also damaged by this fire. There is no report of any casualty in the entire incident, although the damage has been substantial in the shops.

Suddenly the sound of something bursting and the fire spread

According to the information, some people were eating chowmein and other items at the shop as usual. At the same time, suddenly there was a sound of something bursting. Due to this people got scared and started running around. Then the fire started spreading there with the spark. Local people and shopkeepers tried to douse the fire with 12 fire extinguishers but could not succeed. After this the fire brigade team was called.

11 vehicles of fire brigade found the fire under control

As soon as the information was received, 11 vehicles of the fire brigade reached the spot. The fire was brought under control after about half an hour of effort. Fire Officer Rajesh Kumar Sharma of the Fire Department said that about 5 shops have been destroyed in the fire. The damage has been enough. The cause of the fire is said to be short circuit. However, the entire incident is still being investigated. Fortunately, the fire was brought under control in time, otherwise a major accident would have happened in Amar Colony.