This railway station of Agra may be closed for passengers, the reason is a temple 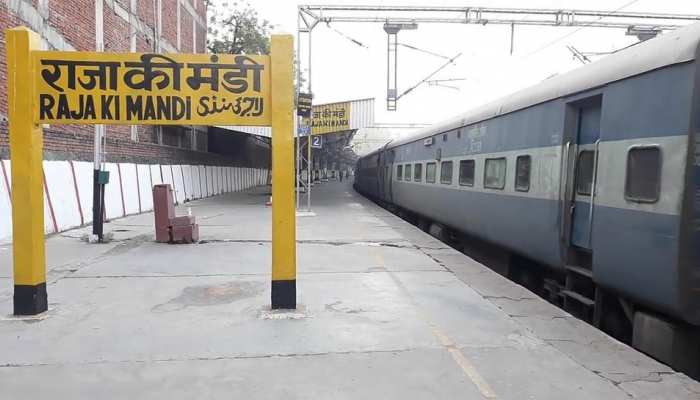 Temple Row: The controversy over the temple situated at the Raja Ki Mandi railway station of Agra is increasing. The railways has warned that if the temple on platform number 1 of the station is not removed, then the station may have to be closed for passengers.

Agra News: Raja Ki Mandi railway station of Agra can be closed for passengers. The DRM has said this by tweeting in the midst of the ongoing controversy over the temple located on platform number 1 of the station. The DRM has said that if the Chamunda Devi temple is not removed, then the station can be closed for passenger use. Please tell that this temple built on platform number 1 is illegally built.

There is resentment among the devotees about this stand of DRM. They say that unnecessary excuses are being made to remove the temple. While the Railways says that the temple causes disruption in the movement of passengers. Along with this, the speed of trains also decreases due to this. Railways has also given a notice to the temple administration to shift the temple.

speed has to be reduced

The Agra Railway Division said that the railway line has been curved because of the temple. As a result, no train can pass from here at a speed of more than 30 kmph. Not only this, high speed trains also get delayed in leaving from here. Due to which the passengers have to face trouble and their time is wasted. Therefore it is very important to shift the temple elsewhere.

Violation of schedule of dimensions

According to railway officials, the temple of Chamunda Devi is located on some part of Raja Mandi station, which has an area of ​​about 1716 square meters and the temple building is built in 600 square meters. Its area of ​​72 square meters comes on platform number 1, which is a violation of the schedule of dimensions of the railways and is wrong from the security point of view. Officials said that the railways is only doing the work of removing encroachments. If there is any obstacle in this work, then in view of the safety of the passengers, the station can be closed for passenger use.