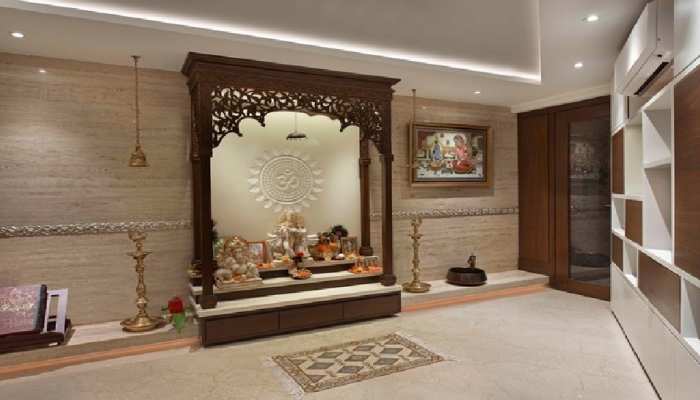 Vastu Tips For Puja Ghar: If the house of worship is absolutely right, then the people living in that house do not get stressed. Their mind remains happy and whatever decision they take is right. Worship should start with a confidence. Keeping oneself away from harmful sensations, it is very important to keep concentration and will power strong in the mind. Therefore, it is very important to have the house of worship in the middle of the northeast ie North East.

The future can also be known from the plot

The geographical conditions of the house are different, their directions and angles are also different, not everyone’s favor is the same, but according to Vastu Shastra, everyone’s place of worship should be at one place and that place is east and north. In the angle, which is called the Northeast angle. The ruling deity of this angle is Jupiter. This is the area of ​​the head of Vastu Purush and is the most sensitive area of ​​any plot.

According to the Vaastu Pad Vinyasa, Brahma resides in the north-east corner and Brahma is the creator of fortune. Experienced Vastu Shastris know the future of that plot or building by looking at the head of a plot i.e. the northeast. Like the forehead of man, the forehead of the plot also gives information about its future. The condition of the plot affects the conduct, behavior, happiness, prosperity, progeny, prosperity etc. of the people living there. The first thing is that the place of worship in the house means the place of worship of the deities, it can be called a temple, but it is good only if the temple is not an idol installation.

Big idol prohibited in the house of worship

Nowadays, instead of places of worship in homes, people have started getting temples established there. In fact, the temple established in the Vedic manner is a task of very important responsibility. Barring a few exceptions, the atmosphere and purity of the house are not such that the service of the deities established there and the requisite responsibility can be performed. And when this is not possible, then the gods feel guilty, the gods get angry. Therefore, if there is a place of worship in the house, then even if you give it the shape of a temple, it is fine, but big idols should not be established in the house. If you have done it, then it is a huge responsibility on you, which you should realize. For example, there should be a complete undertaking of worship of the deity to which the temple belongs. The coming generation should also keep following these rules, otherwise the results will not be good.

best to have clay idol

In the house of worship, pictures or small idols of Ganesha, Durga should be kept on the north wall facing south. It is okay to keep the face of Brahma, Vishnu, Kartikeya and Surya in the east or west. It is advisable to keep only solid stone or wood idols of less than a balisht height. The scripture does not allow keeping idols bigger than this in the house. Some texts have instructed not to keep idols bigger than eight fingers in the house. It is believed that if the idols are made of clay, then there is no defect in it. Another important thing is that the idol of an ancient temple should not be brought and kept in the house of worship. War pictures, Mahabharata pictures, scary figures should not be in the house.

Perform havan in the middle of east-south

The scriptures say that two Shivalingas, two conch shells, two Surya idols, two Shaligrams, three Durga idols, three Ganesh idols should not be kept in the house. If you do Havan every day, then make a kund for Havan in the igneous angle of the worship house. If a monolithic lamp is to be lit, then it should also be kept in this angle. Here there should be arrangement of lamps etc. for lighting. Even by forgetting one should not sleep in the house of worship. Nor should anyone be allowed to sleep there. Your worship room should be kept very pure. Both the broom and mop of the house of worship should be separate.