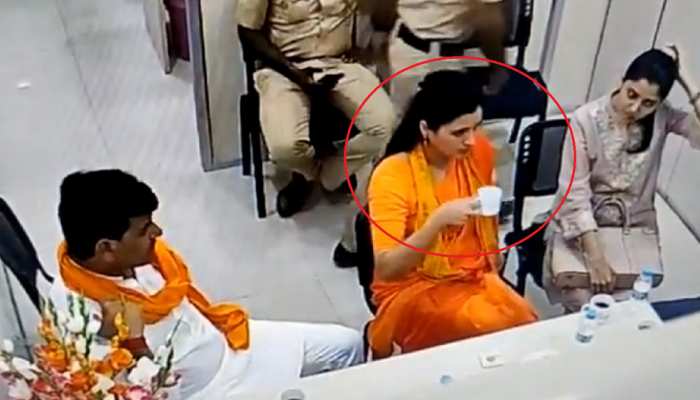 Mumbai Police: MP Navneet Rana, in his letter, had talked about being kept in ‘lock-up’ without any reason and not getting drinking water in police custody. He alleged that he was mistreated on the basis of his caste.

Mumbai Police reply to Navneet Rana: The case of arrest of Independent MP from Maharashtra Navneet Rana and her husband is continuously gaining momentum. Rana, in a letter to Lok Sabha Speaker Om Birla on Sunday, alleged that his arrest by the Mumbai Police was illegal and he was being treated inhumanly while in custody.

Mumbai Police Commissioner Sanjay Pandey has made a tweet in response to these allegations of Navneet Rana. In the video shared with this tweet, Navneet Rana is shown with a bottle of water. Also, she can be seen drinking tea/coffee in the cup. Her husband is also seen sitting next to her.

Navneet Rana has alleged that the Mumbai Police does not even give him drinking water. Now in response, the commissioner said, ‘We have to say something’. This tweet by Sanjay Pandey is believed to be a response to Rana’s allegations, which he had leveled against the Mumbai Police.

Demand for strict action on the commissioner

In his letter, Lok Sabha member from Amravati, Navneet Rana has demanded strict action against Mumbai Police Commissioner Sanjay Pandey. She has claimed that action has been taken against her and her husband on the instructions of Maharashtra Chief Minister Uddhav Thackeray.

Navneet Rana and her MLA husband Ravi Rana were arrested on Saturday after they announced to recite ‘Hanuman Chalisa’ outside Chief Minister Thackeray’s private residence ‘Matoshree’ in Mumbai. After this, the court has sent the couple to 14 days judicial custody.