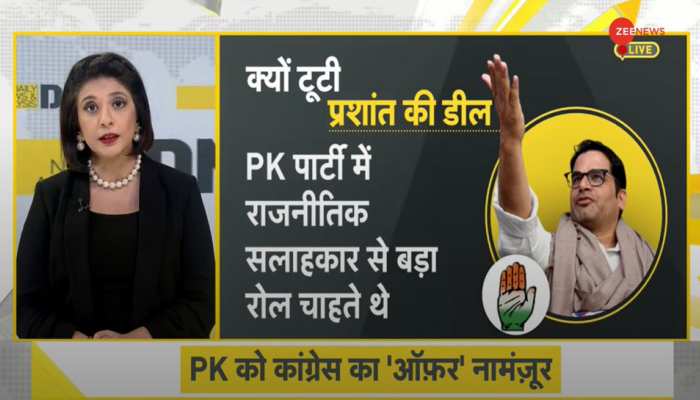 DNA Analysis: Prashant Kishor has given a big message by rejecting the ‘offer’ of Congress. In the tweet, he has spoken of the need for leadership in Congress. Rahul Gandhi is not the only reason behind Prashant’s retreat. Know here…

DNA Analysis: The most difficult time of examination for a person is when he is asked to choose between two favorite things. Whom to release and who to hold. This is probably the biggest mess of life. But there is no confusion in the country’s oldest political party Congress. The Congress has decided that it will follow the Gandhi family, no matter what happens to the party. The Congress has decided that its leader will remain Rahul Gandhi and will never question his leadership ability, even if the party becomes zero across the country.

Rahul Gandhi is the reason behind Prashant’s retreat

What did Prashant Kishor say?

You see Prashant Kishor’s tweet and pay attention to his words. Prashant Kishor wrote- ‘I have turned down the generous offer of Congress to join the party as an Empowered Action Group and take responsibility for the elections. In my humble opinion, the party needs more leadership and collective will than me to fix the rooted structural problems through transformational reforms.

Here the last line of Prashant Kishor’s tweet is worth noting. In which he is saying that the party needs more leadership and collective will than me. To understand this in simple words, he wants to say that the Congress should pay more attention to who is leading it than anyone’s joining and secondly whether the party has the will to win or not?