DNA Analysis: Now children will be vaccinated, know which vaccine is necessary for your child? 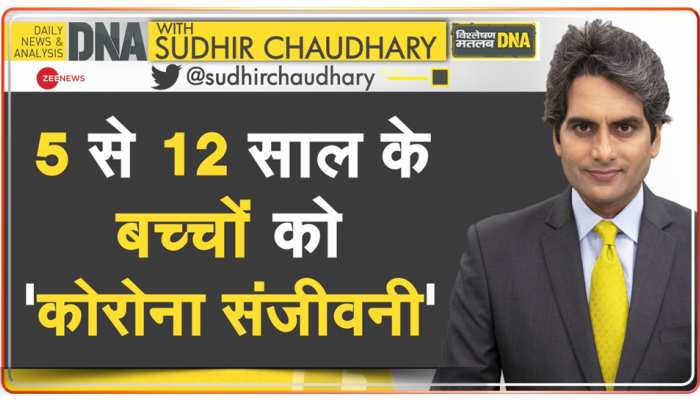 DNA Analysis: In view of the danger of the fourth wave of corona virus, vaccination of children had become very important, because it was feared that children could also be vulnerable to the epidemic.

DNA Analysis: Today we are telling you such a news, which is going to give relief to every family of the country. Now the corona vaccine will also be applied to children above 5 years of age across the country. Till now, children above 12 years were getting the protection of the vaccine, but now children of 5 to 12 years will also be vaccinated against Kovid. During the Corona period, crores of families of the country were waiting for vaccination for small children and now this good news has come.

In view of the fourth wave, vaccination of children is necessary

In view of the danger of the fourth wave of corona, the vaccination of children had become very important. It was feared that children could also be affected by the epidemic. That’s why millions of families in the country want the protection of the vaccine for their children. Schools have also opened in most cities and villages, so the need for vaccination of children has increased. Soon 3 vaccines will be available for children. We explain in detail which vaccines are these.

These 3 vaccines will be given to children

These three vaccines are Corbevax, Covaccine and Xycov-D. Of these, Corbevax will be applied to children in the age group of 5 to 15 years. Covaccine will be for children above 6 years of age, while Xycov D vaccine will protect children above 12 years of age from corona. If any child in your family is between 5 and 6 years old, then Corbewax can be applied only. If the child is between 6 and 12 years old, then Corbevax or Covaxin can be given. If the age of the child is more than 12 years, then you will have the option of 3 vaccines. You can get Corbevax, Covaccine or any of the Xycov-D vaccines. That is, according to the age of the child, you have many options for getting the vaccine.

Everything you need to know about vaccination for children

There will be many questions in your mind regarding the vaccination of children. Would you like to know how many doses of which vaccine will be administered? Where will this vaccine be installed and is it free or will you have to pay for it? If you have this information, then it will be easier for you to choose the vaccine for your children. We give you information about all three vaccines one by one so that you get the answer to every question.

Corbevax is an indigenous vaccine, which has been prepared by Hyderabad-based company Biological-E Limited. Two doses of Corbevax will be applied and there will be a gap of 28 days between them. Corbevax is considered a vaccine with very few side effects i.e. it is safe for children. This vaccine will be provided free of cost in government hospitals, although private hospitals can charge for it. In March this year, Corbevax was approved for children in the age group of 12 to 15. Now this vaccine can also be administered to children above 5 years of age.

Children above 6 years will get Covaccine

After Corbevax comes the number of Covaccine. Covaccine is also an indigenous vaccine. It has been prepared by Bharat Biotech. Children above 6 years will be given two doses, between which there will be a gap of 28 to 40 days. This vaccine is also safe and effective for children. If you get this vaccine in a government hospital, then you will not have to pay a single penny, but in a private hospital you will have to pay the price.

Children above the age of 12 will get Zycov-D

This year is very important for the vaccination of children

There are so many children in the country

There are currently more than 20 crore children in the age group of 5 to 12 years in the country, while there are more than 17 crore 50 lakh children in the age group of 6 to 12 years. Now these children will also be vaccinated and they will also be able to compete with the corona in a better way. The country is progressing very fast and strongly in the fight against Corona. The speed and scope of vaccination in India is better than many developed countries of the world.

More than 800 million adults have received the vaccine

So far, both doses of the vaccine have been administered to more than 800 million adults in the country. More than 4 crore children in the age group of 15 to 18 years have been fully vaccinated, while more than 37 lakh children of 12 to 15 years have been given both doses of the vaccine. Apart from this, booster doses have also been given to more than 2 crore 69 lakh people. A total of more than one billion 87 crore doses of vaccine have been administered in India. This figure is more than the population of one and a half hundred countries of the world and this data of vaccination is increasing every minute.

The greatest danger if the vaccine is not vaccinated

Medical experts believe that in any wave of the epidemic, those people who have not been vaccinated are most at risk. Children between the ages of 5 and 12 used to fall in this circle. Generally, the immunity of young children is better than that of older people. Still, there was an apprehension among the people that what would happen if their children got infected with corona or if some dangerous variant spread. Now this worry of his will also go away.