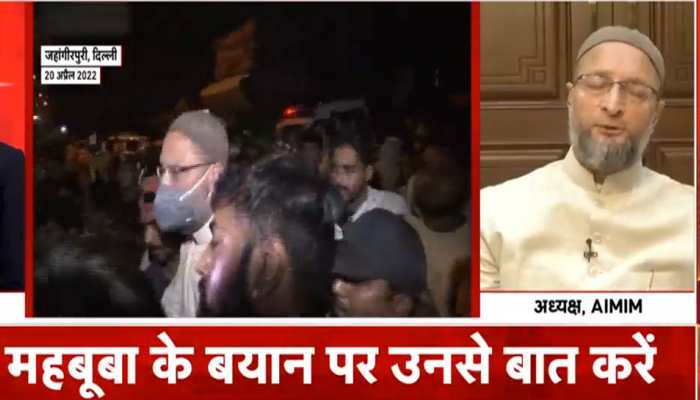 What did Owaisi say on Mehbooba Mufti’s statement?

Responding to Mehbooba Mufti’s statement, Asaduddin Owaisi said, ‘What Mehbooba Mufti says is her statement. BJP can give a good answer on this, because they were in power with them.

Asaduddin Owaisi while talking to Zee News accused the Bharatiya Janata Party of taking unilateral action. He said, ‘One-sided action is being taken through bulldozers. In Madhya Pradesh’s Sendhwa, 13 Muslim houses were demolished, while 22 houses and slum houses were demolished in Khargone. In Delhi, of course, the houses of most of the Muslims were demolished. Along with this, Owaisi said that BJP has started Alan-e-War against Muslims and houses are being demolished without giving notice.

What Owaisi said on Mehbooba Mufti’s statement that ‘BJP has started a war against Muslims…’ , See #TaalThokKe LIVE #BulldozerRaaj Tweet on @aditi_tyagi @asadowaisi

Former Jammu and Kashmir Chief Minister and PDP Chief Mehbooba Mufti has attacked the government over the bulldozer action. Referring to the action of the bulldozer, Mehbooba Mufti said that this country was built on Hindu-Muslim brotherhood and today within this country the BJP government is not only demolishing the homes of Muslims with bulldozers, but also snatching their jobs. is. He said that there is no law in the country, the one who likes it, takes a bulldozer and demolishes someone’s house and shop. After this, only those people are put in jail, whose houses and shops are demolished.