Russell took out his anger in the practice session, the chair was blown away; VIDEO 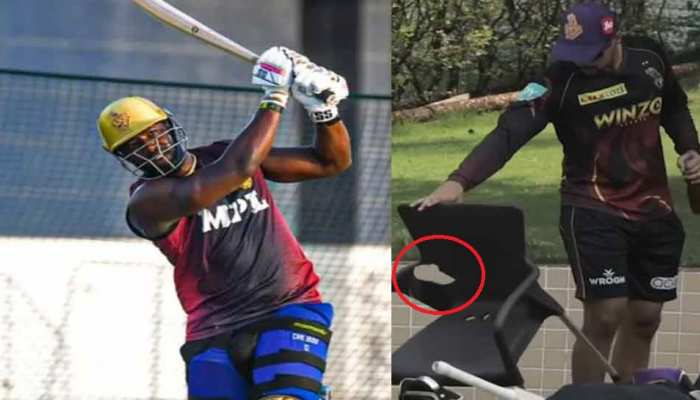 Andre Russell Six breaks The Chair: Kolkata Knight Riders’ (KKR) explosive all-rounder Andre Russell is known for his batting and playing long shots. Russell of West Indies is famous all over the world for hitting big sixes on the strength of his powerful body. In this season of IPL too, Russell has played many big shots on the strength of muscles. Kolkata has recently shared a video of Russell’s nets session on his social media account, in this video Russell is seen playing some such powerful shots, which everyone is surprised to see.

Russell blows up the chair

Kolkata will next face Delhi Capitals (DC) on Thursday. Before this, Russell is sweating profusely. It is very important for KKR to win in this match. KKR has been facing continuous defeats this season. Meanwhile, a video is becoming quite viral on social media, in which Russell can be seen breaking a chair and it is broken due to a powerful shot. There was so much power in his shot that there was a big hole in the chair. Sharing the video, Kolkata wrote the caption, ‘Just wait till the end for Russell’s effect.’

Andre Russell is known for blowing the team in front with his bat. Russell is doing something similar this season as well. Russell has so far scored 227 runs in 7 innings in IPL 2022. He has scored these runs at a strike rate of 180.15 and an average of 45.40. Talking about his IPL career, he has played a total of 92 matches. In these matches, he has scored 1927 runs at a strike rate of 178.76. Russell has also scored 10 half-centuries in IPL.

Kolkata Knight Riders (KKR) have lost 5 out of 8 matches so far and are at the eighth position in the points table after winning three matches. The team’s next match is to be played on April 28 which will be against Delhi Capitals and will be played at Wankhede Stadium in Mumbai. KKR have suffered consecutive defeats in their last four matches, so this match is going to be very important for the team.