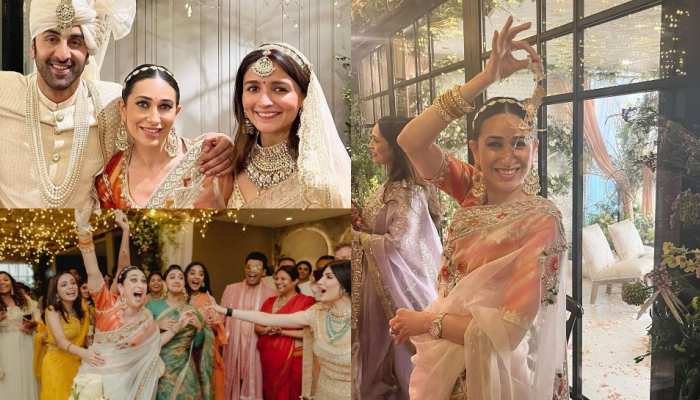 Alia Bhatt Kaleera: At the wedding of Ranbir Kapoor and Alia Bhatt, Kaleera has fallen on Karisma Kapoor. During this pictures Karisma has posted on social media.

The excitement of actress Karisma Kapoor at Alia Bhatt-Ranbir Kapoor’s wedding was worth watching for everyone when Dulhania Alia’s kaleera fell on her. Karisma has shared pictures of the same ritual with the fans. Karisma Kapoor’s expressions are being liked a lot in the pictures. In the pictures that surfaced, Karishma is holding Kalira.

Sharing the pictures on Instagram, Karisma wrote, ‘Instagram VS Reality. Kalira fell on me guys!’ In the first picture, Karisma shows the camera to Kalira who fell on her. She is smiling giving a beautiful pose. The next picture is where all the fun is. In this, Karishma is shown smiling after catching Kalira. Others around him are also excited. These include Ranbir’s sister Riddhima Kapoor Sahni, filmmaker Karan Johar and Alia’s friends.

This is the belief of the fall of Kalira

In Punjabi wedding rituals, the bride wears a kilire with a bangle and she then shakes her wrist on the heads of her sisters and friends, and if the kaleera falls on them, it is considered a sign that the kalira is on top of them. Falls, he gets married. In such a situation, according to this belief, soon once again shehnai can be played in Kapoor family and Karishma can become Dulhania.

Alia was wearing a beautiful off white outfit on her wedding. At the same time, her husband Ranbir was wearing a sherwani matching her outfit. Let us tell you that the wedding rituals of Alia and Ranbir started from April 13. Earlier, Ganesh worship was done in his house Vastu. After this, both performed the rituals of Mehndi and Haldi among close friends. After this his marriage also took place between very close relatives.

After all the wedding rituals, Alia Bhatt shared the first pictures with the fans through her Instagram. After this, the couple also reached outside the venue to meet the media and during this, Ranbir Kapoor was seen showering love on his bride and carrying her in her arms.