Balasore: A shocking picture has surfaced on social media in which a journalist from Odisha’s Balasore district is shown chained to a hospital bed during treatment. Notably, they were arrested on Wednesday following a brawl with home guards after their vehicles collided.

A photograph of journalist Loknath Dalai shows him lying on the hospital floor with his legs handcuffed and iron chained to the hospital bed.

According to sources, Dalai was allegedly called by the Nilgiris police on Wednesday morning for abusing and assaulting the home guards. He was later admitted to the hospital after he was allegedly assaulted by the police at the police station. On 4 April, home guard Niranjan Rana filed a complaint at the Nilgiris police station that the Dalai abused her in filthy language, assaulted her and threatened dire consequences if she was on duty. 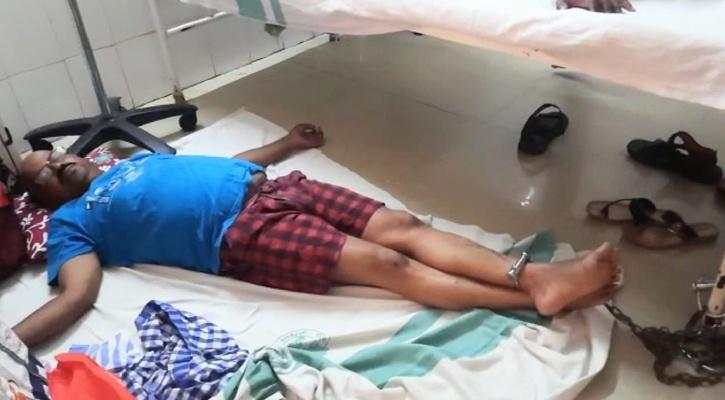 Dalai, who works as a Nilgiris reporter for a local media house, has alleged that his arrest is an attempt to avenge the publication of news about the failure to stop the smuggling of brown sugar. He demanded action against IIC and another officer of Nilgiri police station.

“The police made me sit for five hours. When I tried to contact my friends, the local police officer thrashed me and I fell. I almost fainted. Later on Wednesday evening, I was admitted to Balasore District Hospital,” Dalli told The Telegraph.

Expressing deep concern over the incident, Union Minister Dharmendra Pradhan said that media is the fourth pillar of democracy. “In a democracy, differences of opinion must be respected. But handcuffing a journalist like a professional criminal is not acceptable in a healthy society. Pradhan has urged the senior police officers to conduct a proper inquiry and take strict action against the officials involved in this act.